Note: This blog post is a bit old, and some sections may be out to date. We have published updated instructions for monitoring CrateDB with Prometheus and Grafana here.

In my previous miniseries, I walked you through the process of running your first CrateDB cluster on Kubernetes.

Prometheus is an open source monitoring system that allows us to scrape metrics from a variety of sources. We can then query these metrics and build analytics and alerting systems on top of them.

We combine Prometheus and Grafana to produce a suite of reporting and alerting tools that let us spot infrastructure anomalies, monitor performance, and so on.

In this post, I show you how to do something similar. Specifically, I show you how to set up Prometheus and Grafana with CrateDB so that you can monitor CPU, memory, and disk usage, as well as CrateDB metrics like queries per second.

This post assumes you already have a CrateDB cluster running on Kubernetes. If that is not the case, my previous Kubernetes miniseries shows you how to get your first cluster spun up. Once that's done, come back to this post.

With a CrateDB cluster running, the next thing we need is a working Prometheus setup to scrape the data we want to monitor. (Later, once we have that data, we can graph it with Grafana.)

We already have the crate namespace for our CrateDB stack. But let's keep our monitoring stack separate. This will allow us to monitor multiple stacks, should we want to expand our setup later.

By default, Kubernetes pods in separate namespaces do not have access to each other. But Prometheus needs access for monitoring purposes, so we're going to have to configure that explicitly.

We can allow Prometheus to access separate namespaces using Kubernetes Role Based Access Control (RBAC) authorization. In a nutshell: RBAC allows you to define roles along with their associated privileges.

The first step is to define a prometheus role:

Here, we're using a ClusterRole because Prometheus should have access to different namespaces across the Kubernetes cluster. (The alternative is a Role, which is restricted to a single namespace.)

In the rules section, we:

This covers the full list of operations Prometheus needs to be able to monitor a CrateDB cluster running in a separate namespace.

Now we have a prometheus ClusterRole defined, we can bind it (using a ClusterRoleBinding) to any users and service accounts that we want.

Prometheus is a process, so we should use a ServiceAccount.

The three configurations (ClusterRole, ServiceAccount, and ClusterRoleBinding) can be kept in the same file. Let's call it prometheus-rbac.yml.

On GitLab, select the Download button in the top right-hand corner of the file viewer to save the file to your local machine.

Once saved, create all three RBAC configurations like so:

With RBAC configured, we can now add a basic ConfigMap for Prometheus. Let's use the official configuration file example provided by Prometheus. It's too big to embed here, but check it out on GitLab.

Save this file as prometheus-configuration.yaml and then run:

The next thing we need to do is create a service so that we can access Prometheus.

Note the prometheus.io/scrape: 'true' annotation. This is what Prometheus uses to determine which pods and services to scrape for metrics. I'll come back to that later.

Finally, we need a controller that manages our Prometheus pod.

Let's break down that configuration:

After running this command, Kubernetes should initialize your pod. Once initialized, you will have a Prometheus instance running that scrapes any pods or services with the prometheus.io/scrape: 'true' annotation.

To verify that your Prometheus is running, expose the service via minikube:

Navigating to the URL in the output table and you should be greeted with the Prometheus dashboard: 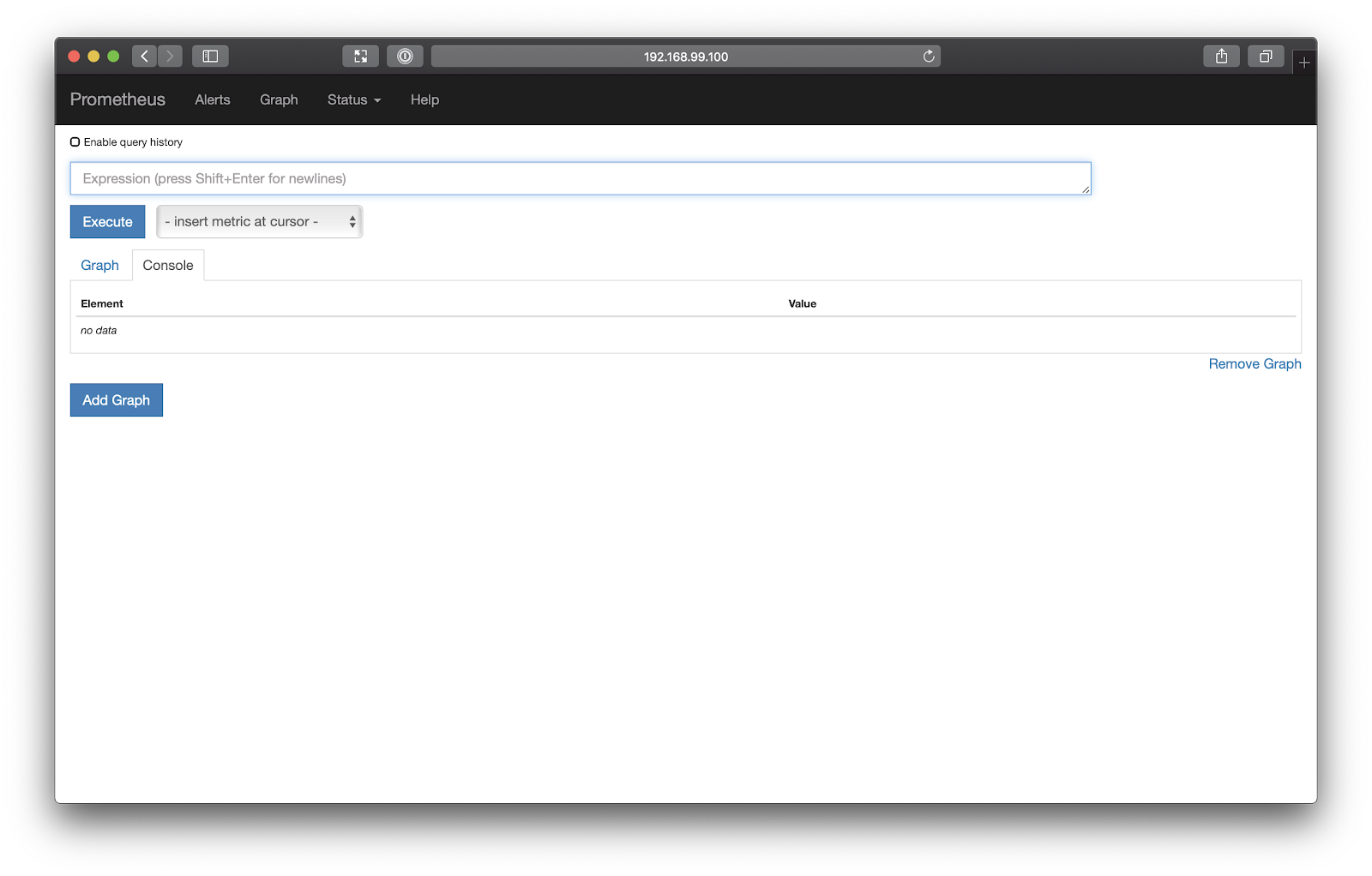 Because the Prometheus pod has the prometheus.io/scrape: 'true', Prometheus should already by scraping the metrics from its own pod. You can test this by querying prometheus with this expression:

Copy and paste this into the expression input field, and then select Execute. After switching to the Graph tab, you should see a graph like this: 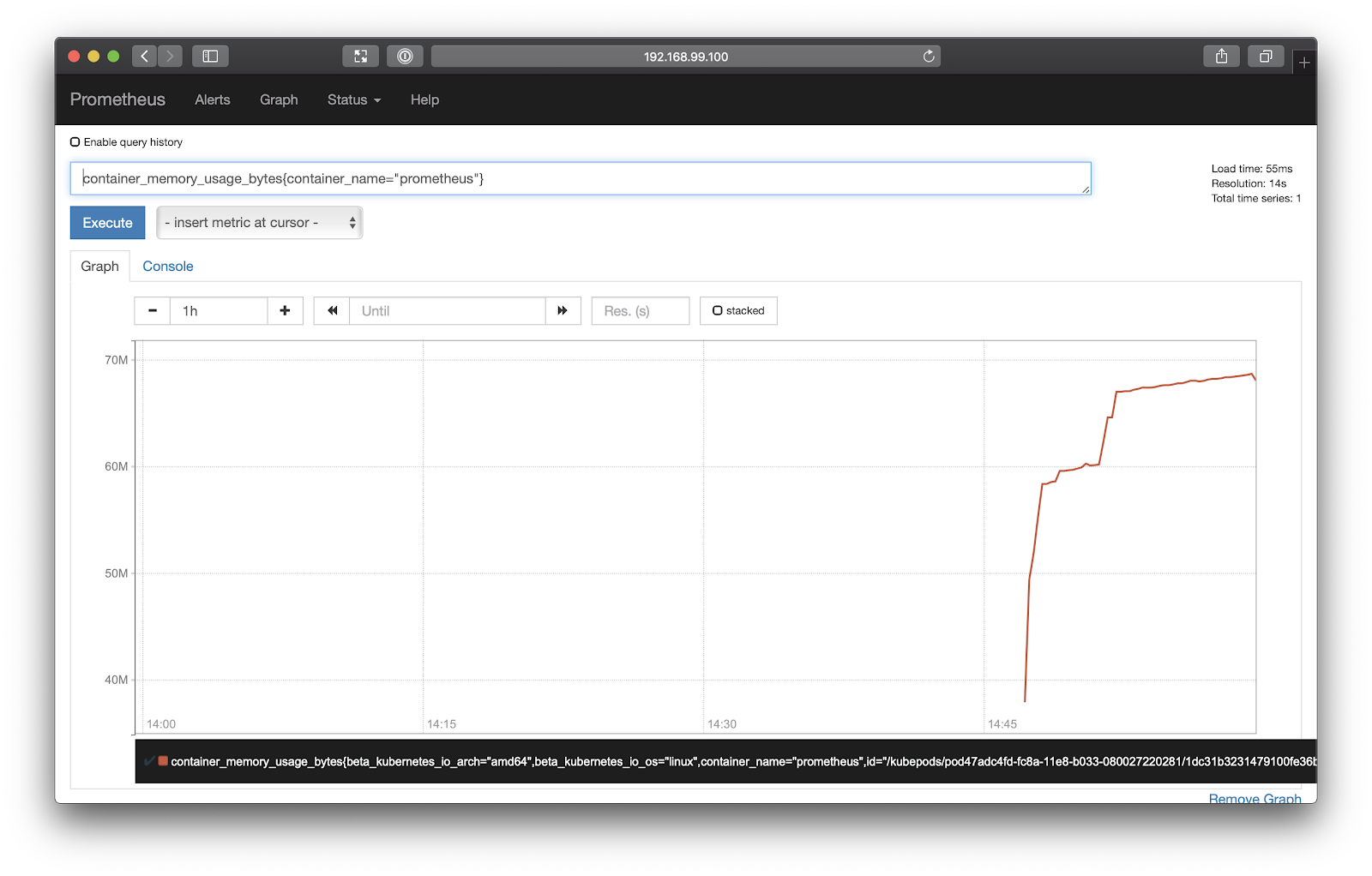 Fantastic! This shows us the memory consumption of the Prometheus pod over the last hour.

Before we can get Prometheus to scrape metrics from CrateDB, we need to make a few changes to our CrateDB configuration.

To scrape CrateDB, we're going to make use of Java Management Extensions (JMX) and the CrateDB JMX monitoring feature.

To use JMX monitoring with Prometheus, we need to use the JMX exporter to expose JMX metrics via an HTTP endpoint that Prometheus can scrape.

Before we change the CrateDB controller configuration, we need to create a ConfigMap for the JMX exporter so that we can translate a few of the JMX metrics into metrics that make more sense for Prometheus:

With the JMX exporter ConfigMap in place, we can update the CrateDB controller configuration used in the previous miniseries so that it looks like this:

That's a lot to take in.

Let's break down what changed:

Kubernetes should then start to update your CrateDB pod.

Once your CrateDB pod has been updated, JMX metrics should start to be scraped into Prometheus.

You can verify this by bringing up the Prometheus dashboard again and selecting Status from the top navigation bar, and then Targets.

You should see three targets: 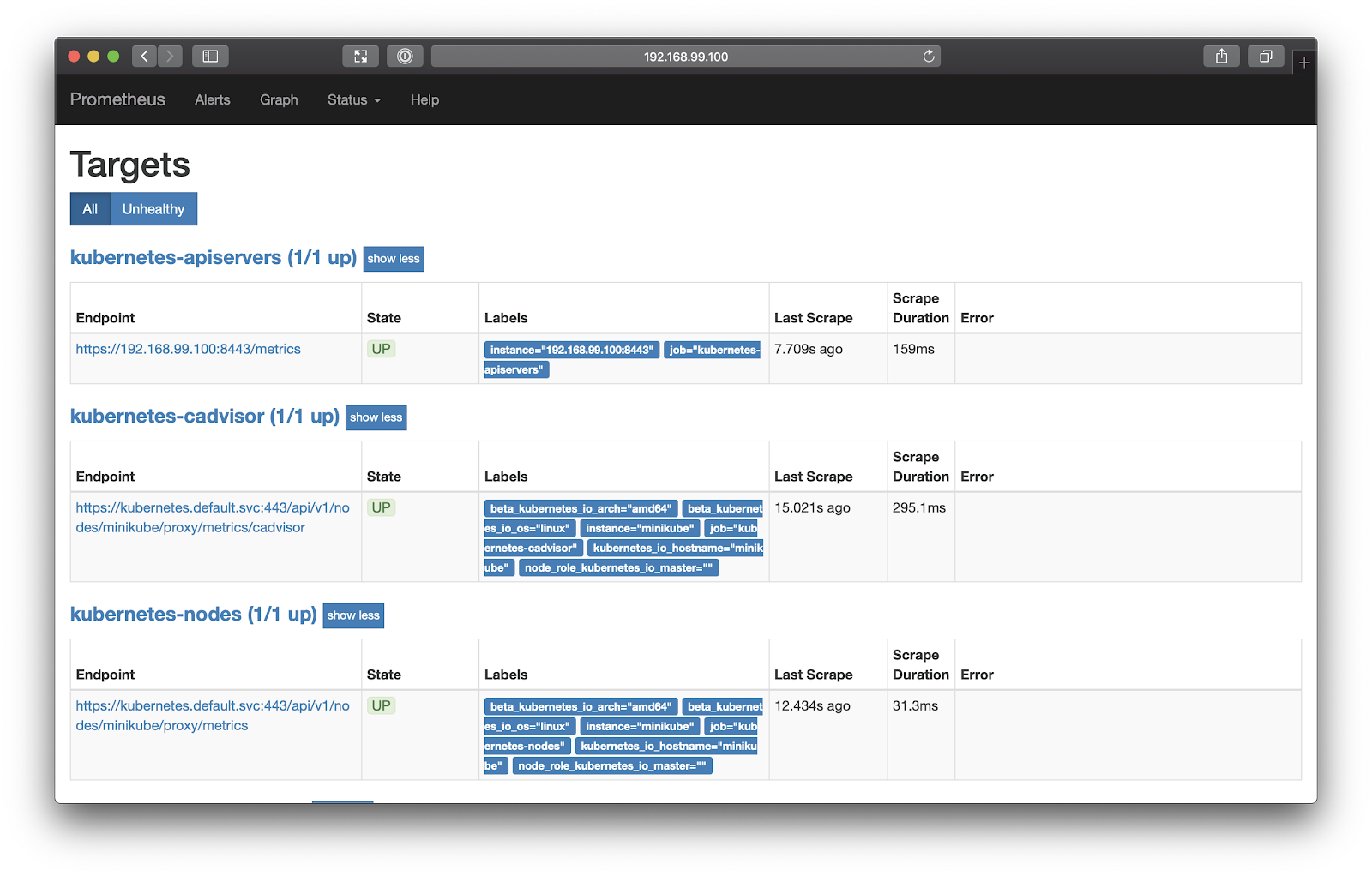 Now that JMX metrics are being scraped, you can query Prometheus.

Go back to the query screen, and issue this query:

When I did this, I switched to the Graph tab and changed the graph period (the first input at the top) to 5m (five minutes).

If you do the same, you should see something like this: 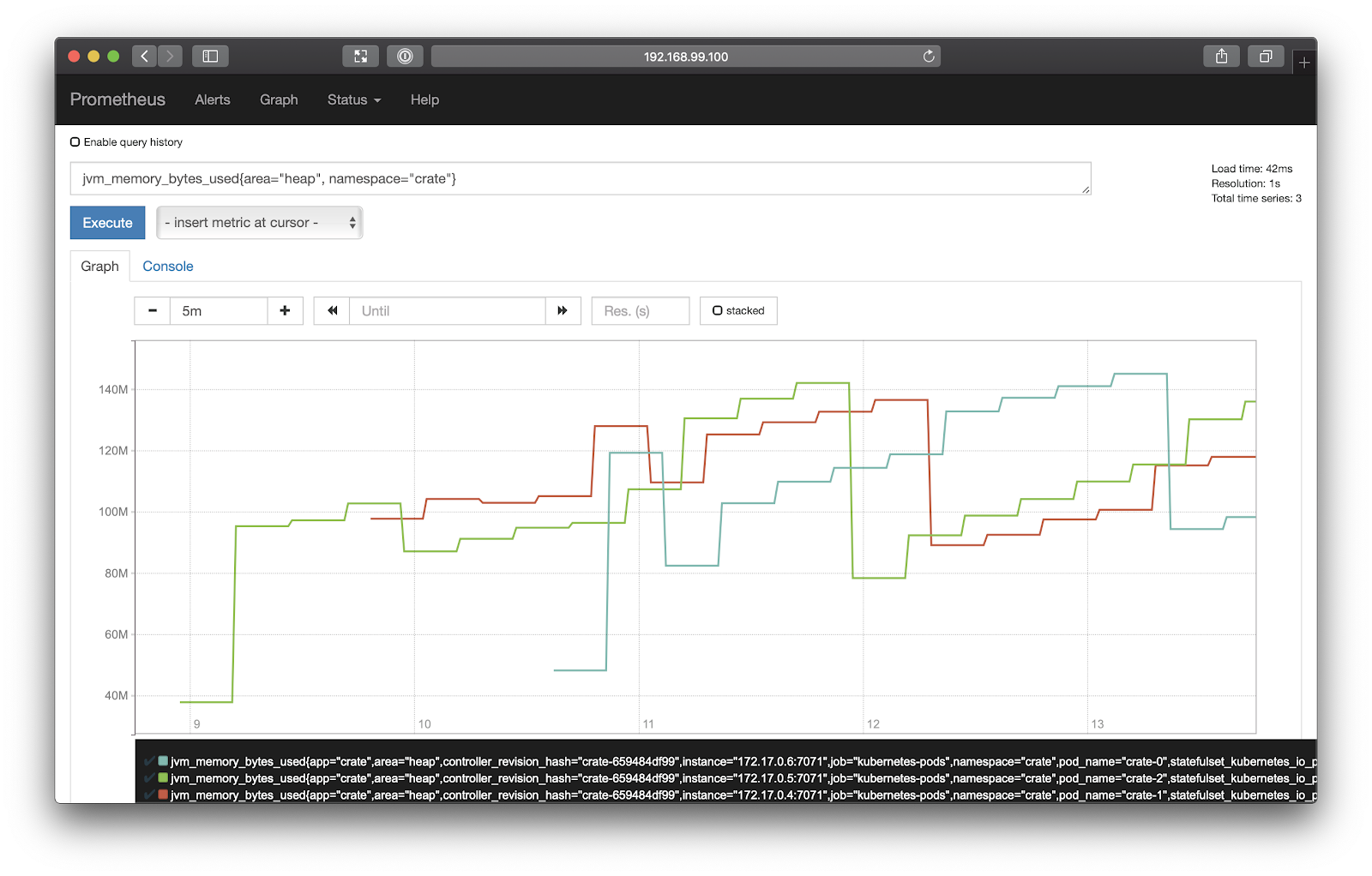 This query is particularly useful because it allows us to monitor the Java Virtual Machine (JVM) memory usage. JVM memory usage can be used to determine things like performance bottlenecks, memory leaks, and so on.

Over time, a healthy CrateDB instance's JVM memory usage should look like a sawtooth pattern. This is because heap usage accumulates steadily over time, and is then released by the Java garbage collector.

Prometheus is a useful tool for scraping metrics, but it isn't so useful for monitoring purposes.

So, let's deploy a Grafana instance and configure Prometheus as a data source. Grafana will then let us assemble a monitoring dashboard.

We only need three components for Grafana:

Grafana has a web administration panel that requires you to log in before you can use it. It's good practice to configure user accounts in Kubernetes so that they persist across multiple deployments. You can do that using Kubernetes secrets.

Let's create an admin user with the password "admin".

Kubernetes require that secret values be base64 encoded. We can get the necessary encoded string, like so:

Then insert that into a secret:

Once the secret has been created, we can define a service, like this:

Then, create the service:

After you run this command, Kubernetes will initialize your pod.

Once the pod is running, you can grab the Grafana URL:

This will bring up the login screen: 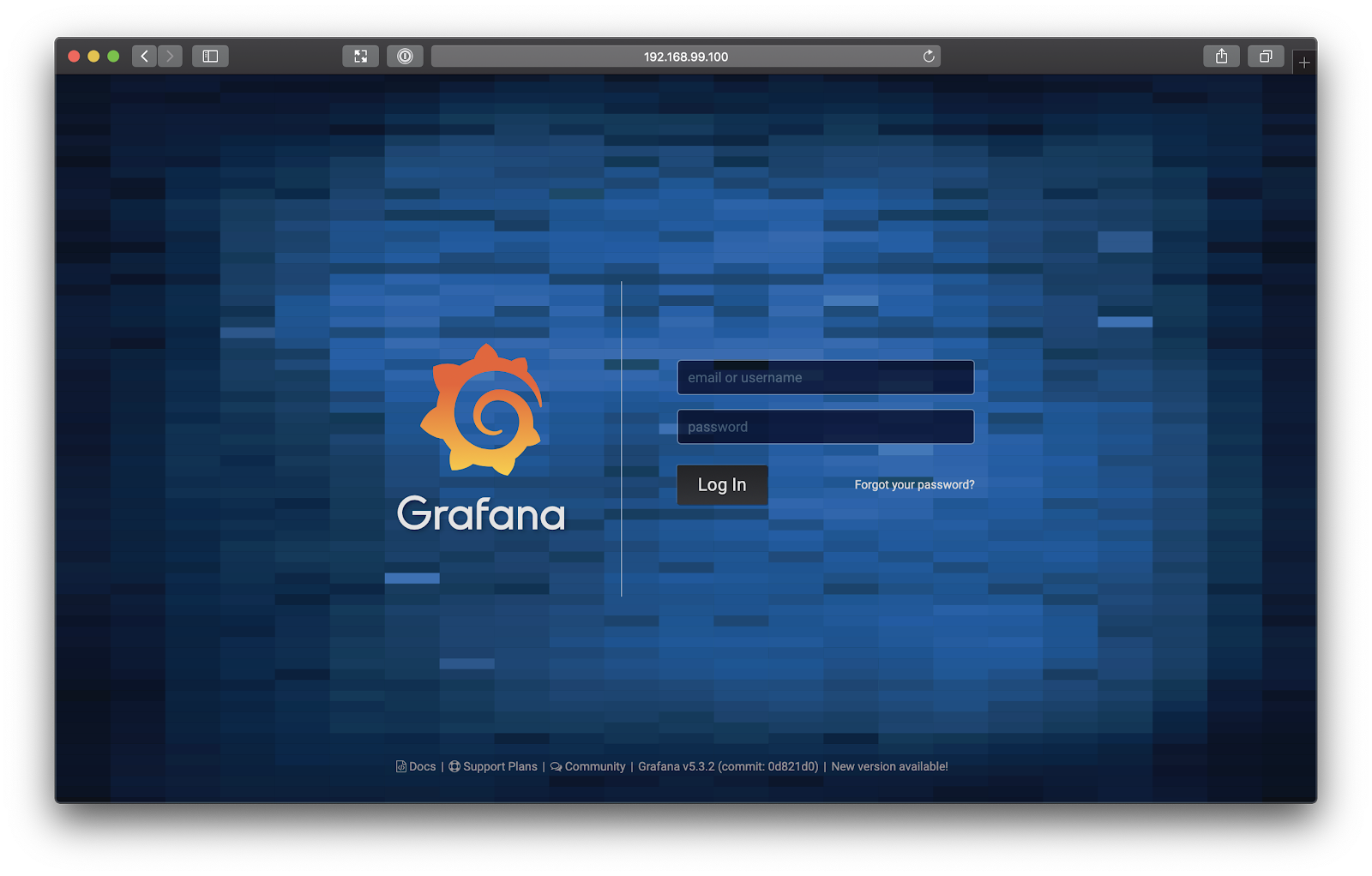 Once you're logged in, you should see the home dashboard: 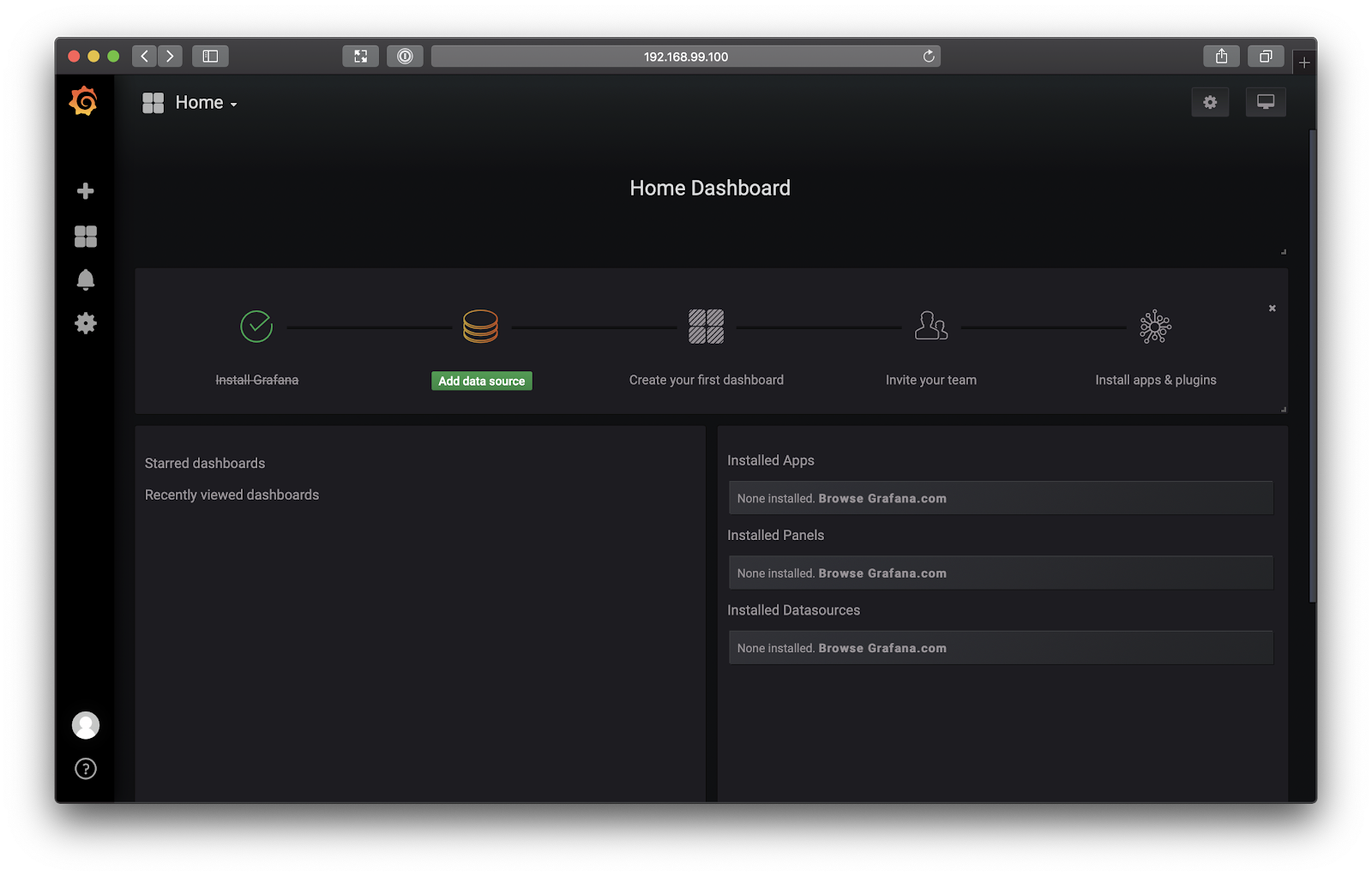 Grafana comes with a Prometheus data source by default. So, select that from the Type drop-down, and then configure the data source like so: 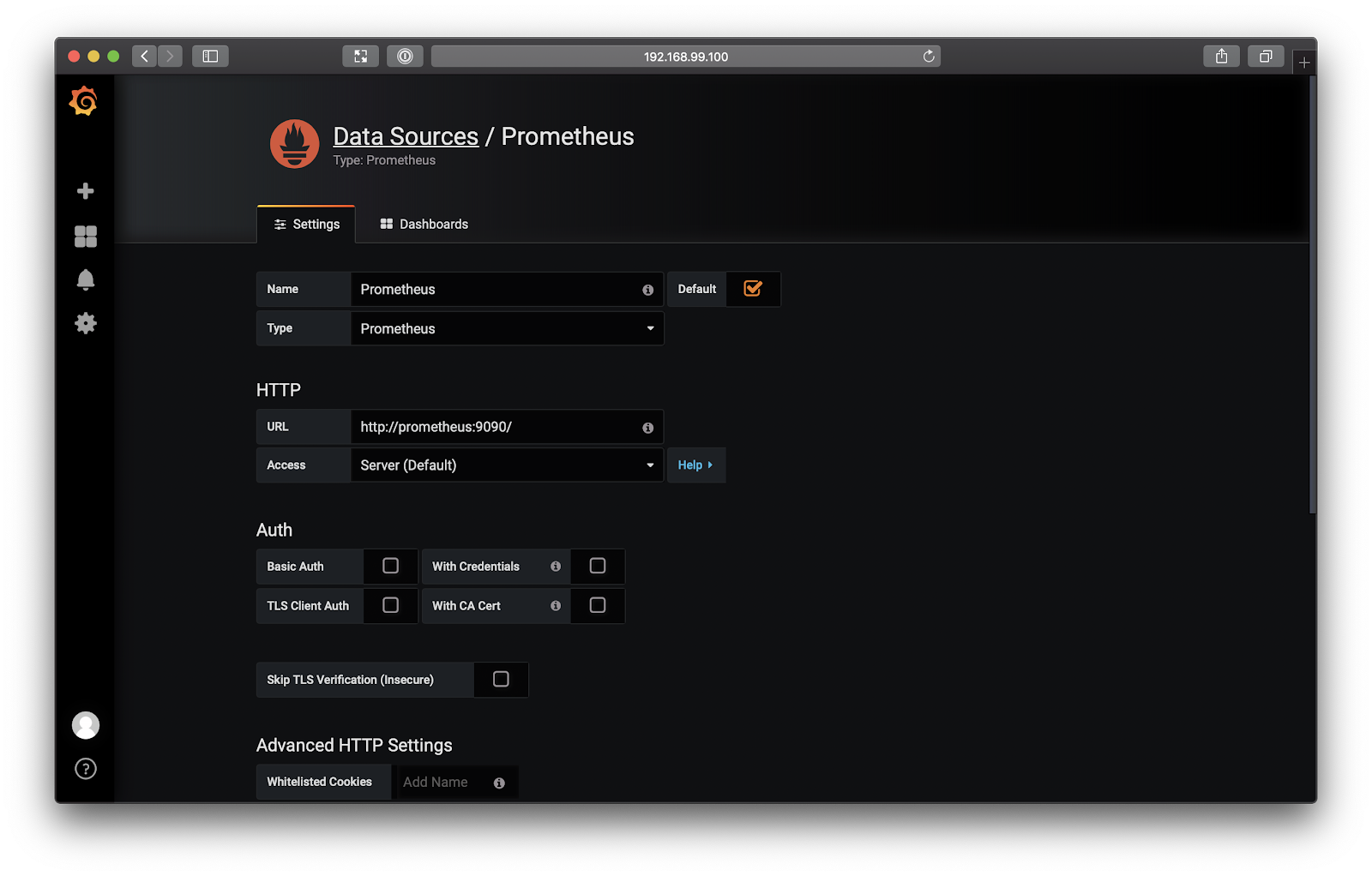 Scroll down, and select Save & Test. You should see a confirmation message saying "Data source is working".

Set Up Your Dashboard

Go back to your Grafana home dashboard.

You should be invited to set up a new dashboard: 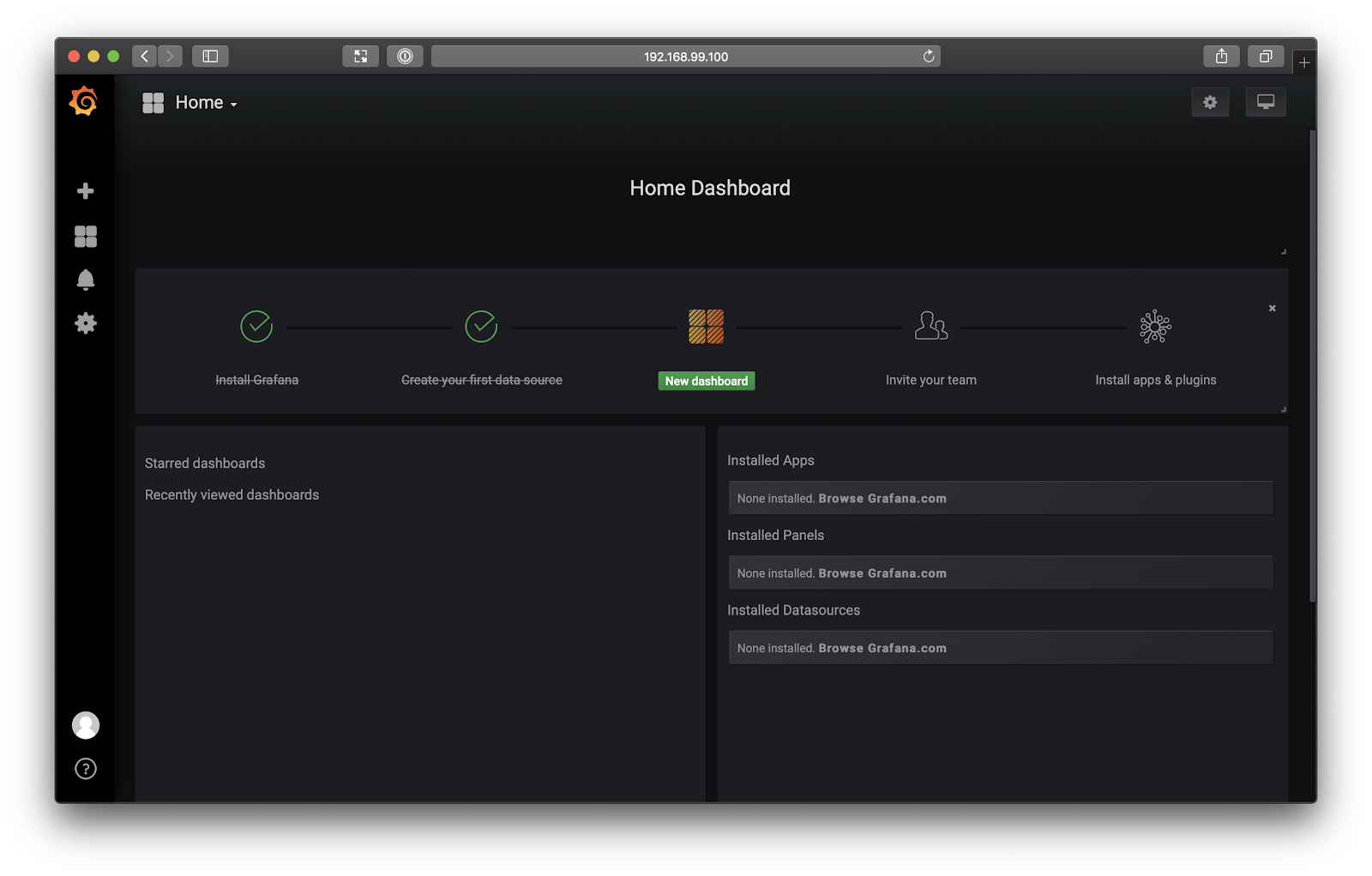 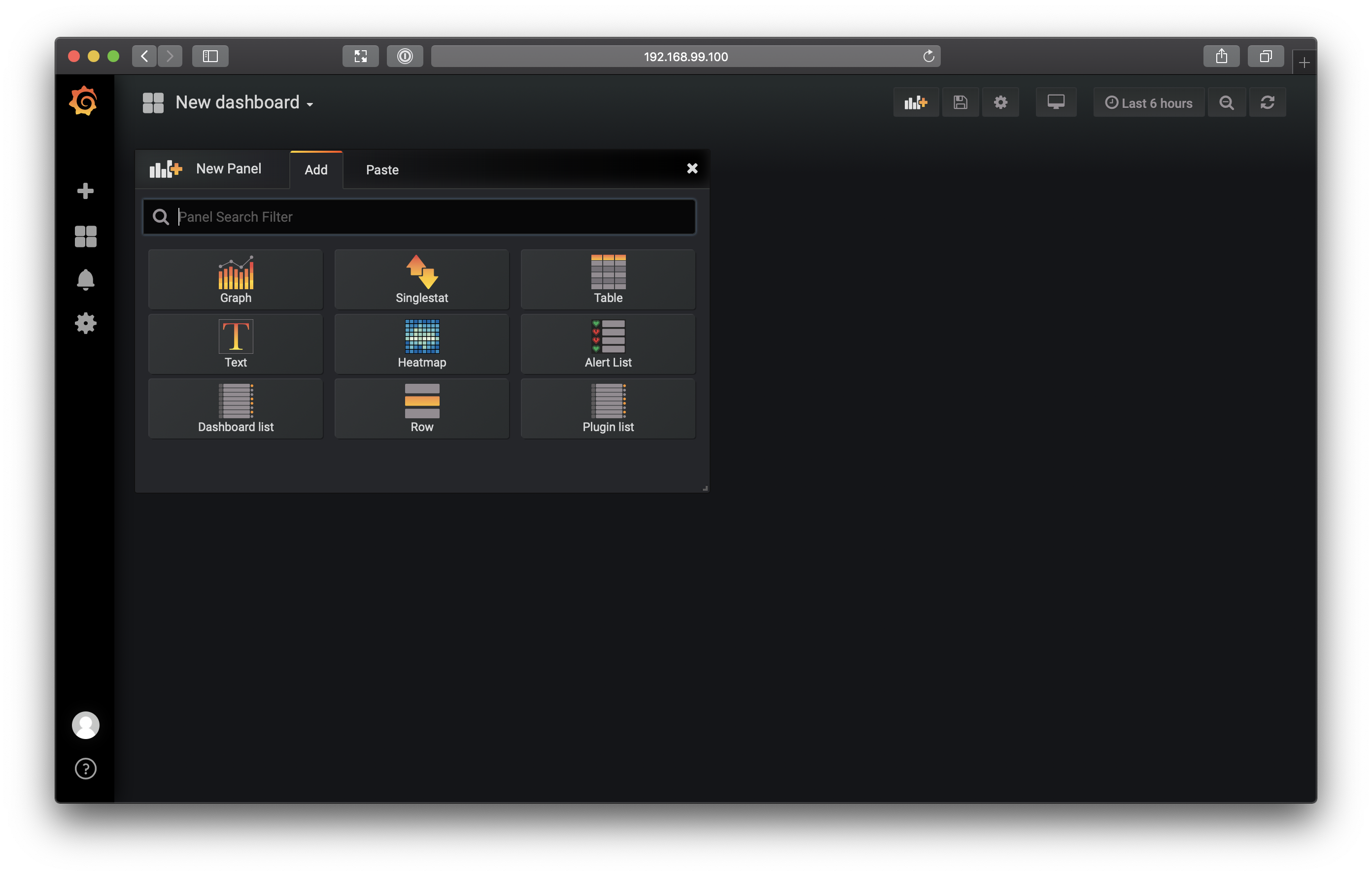 Select Graph from the New Panel widget (shown in the screenshot above).

Initially, you will be greeted with a screen that looks like this: 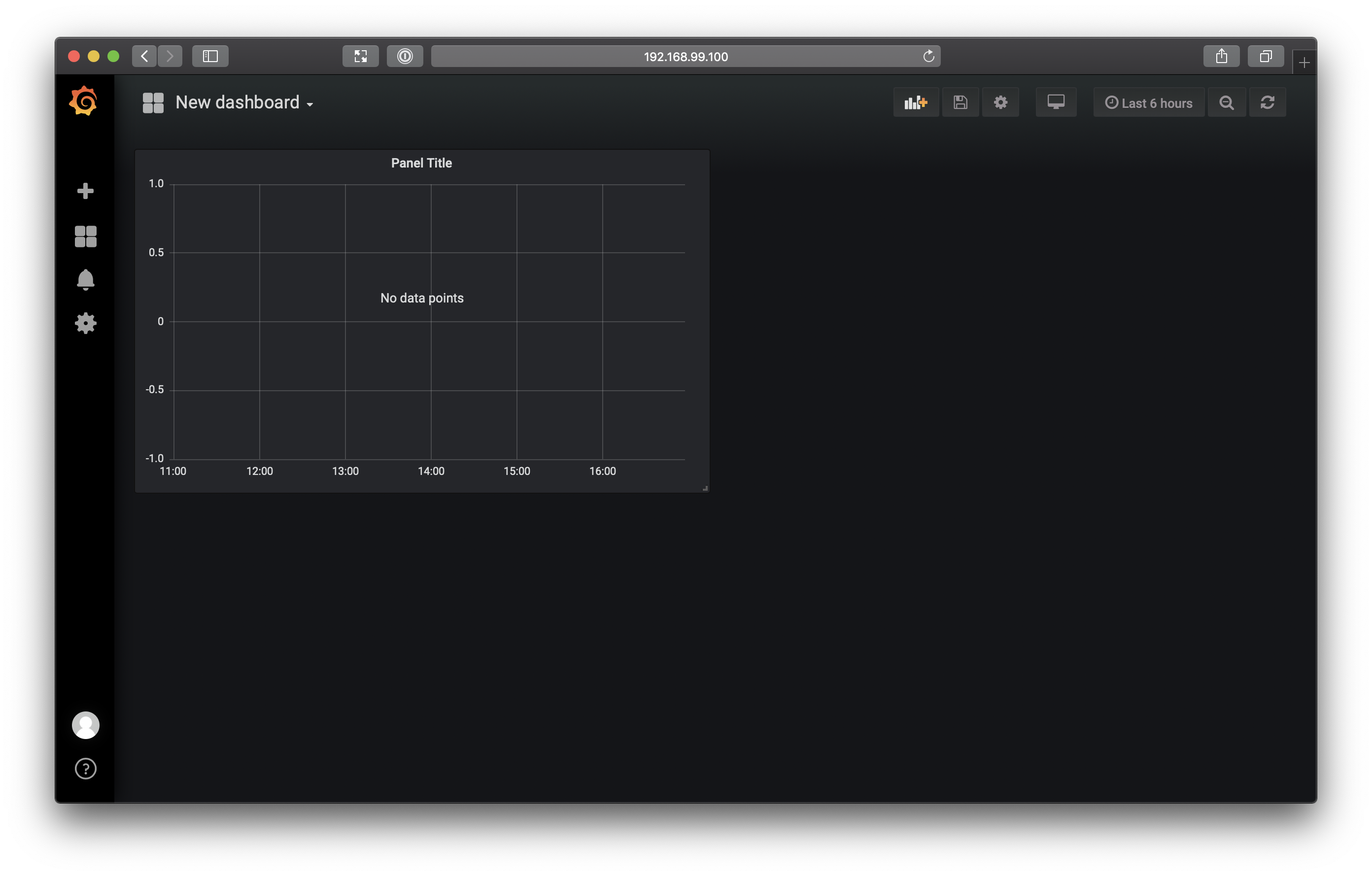 The next thing we need to do is configure it.

Click the panel title ("Panel Title" in the screenshot above) to get a drop-down menu, and from that menu, select Edit. 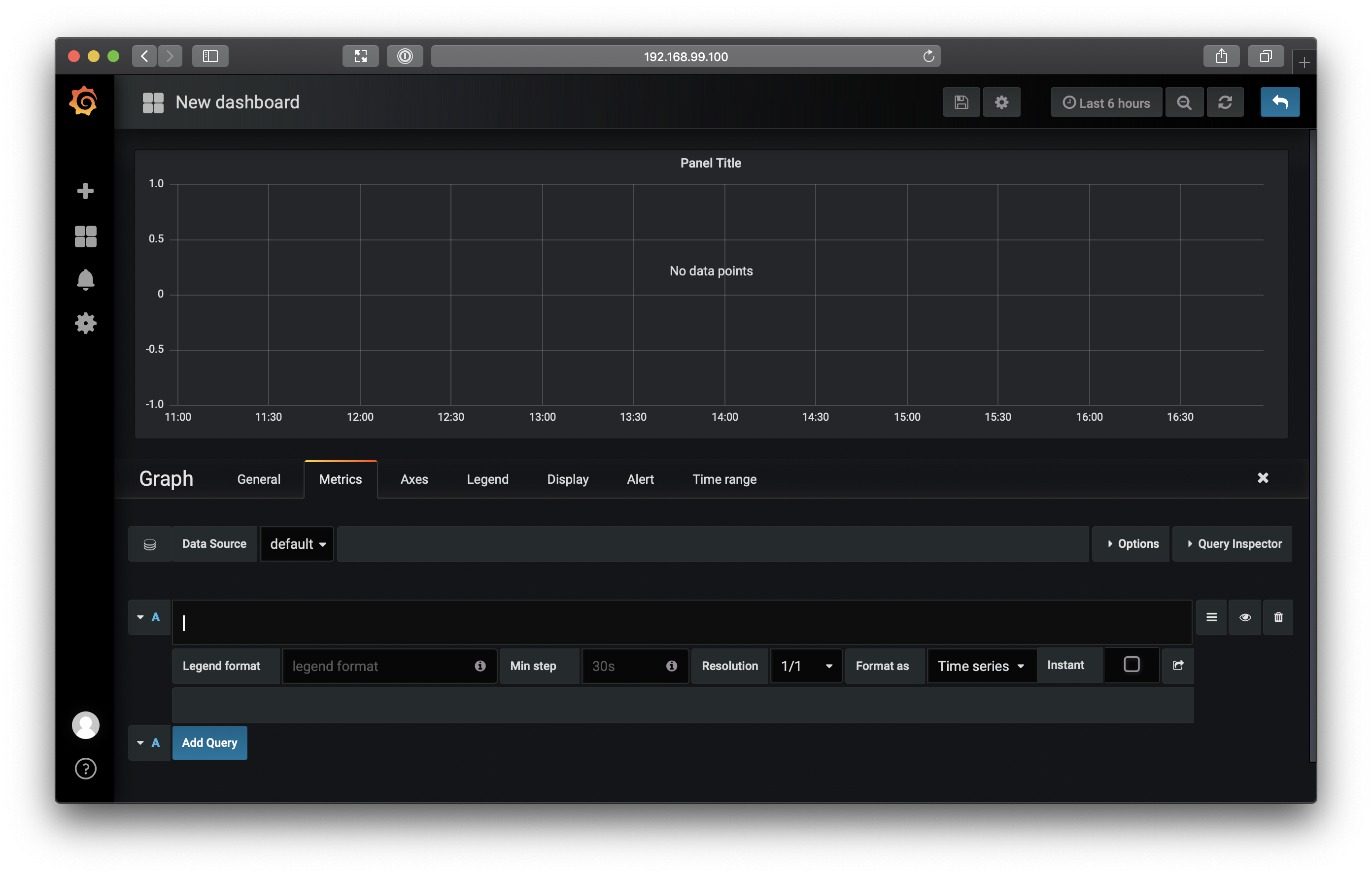 You can execute queries against Prometheus using the query box with the "A" label.

Let's start with this query: 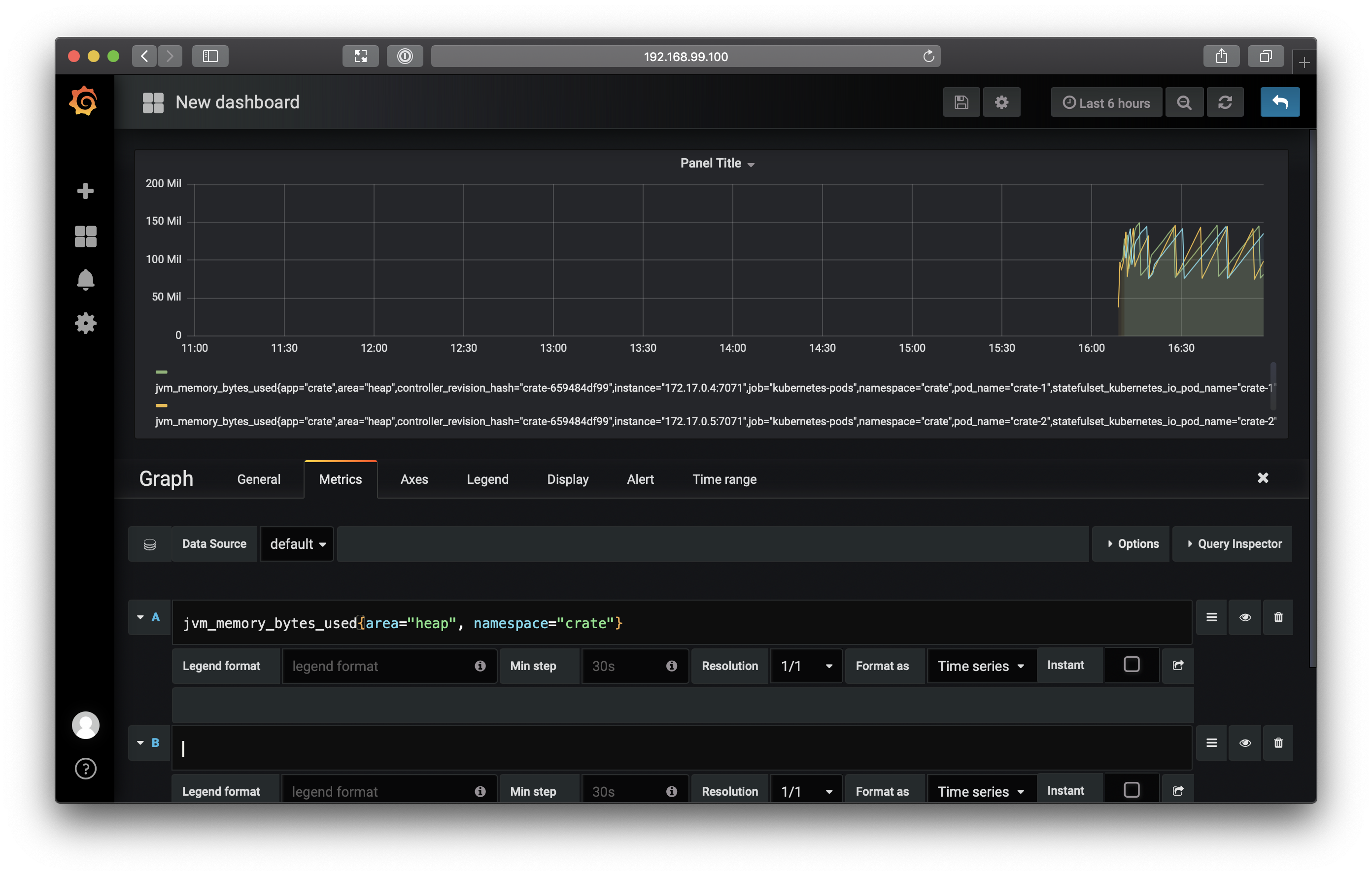 Here we see a graph of the JVM memory usage, like before.

We need to make a few tweaks:

Then, select the blue return arrow from the top right-hand menu.

You should be returned to the dashboard screen, and your panel should have a graph in it. Select the resize handle from the bottom right-hand corner of the panel, and drag it out to fill the whole width of the screen.

Finally, select the save icon (a floppy disk) from the top menu, and name your dashboard "CrateDB".

When you're done, you should see something like this: 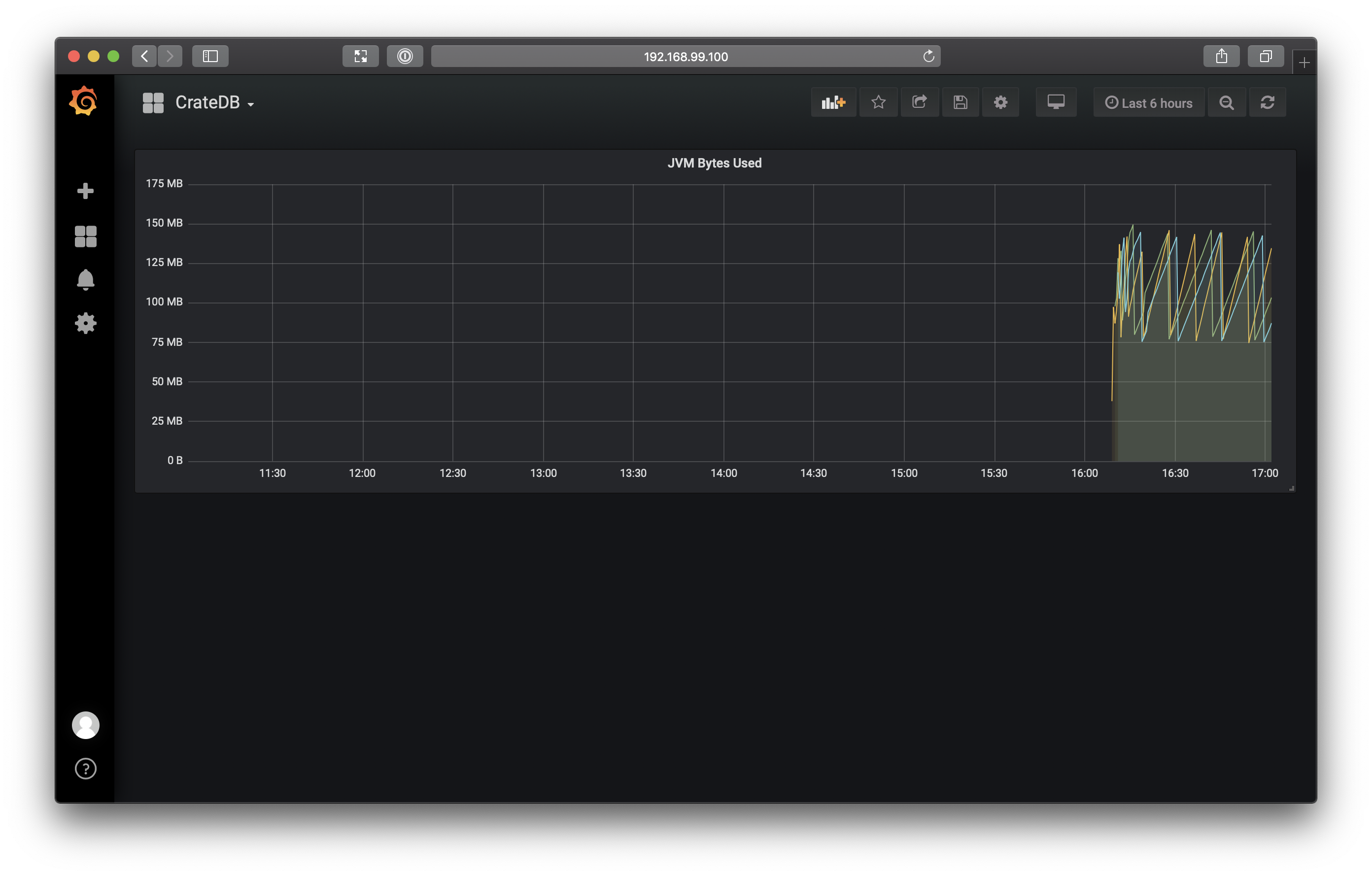 Follow a similar procedure as before, but use the following two queries:

When you're done, you should have a dashboard like this: 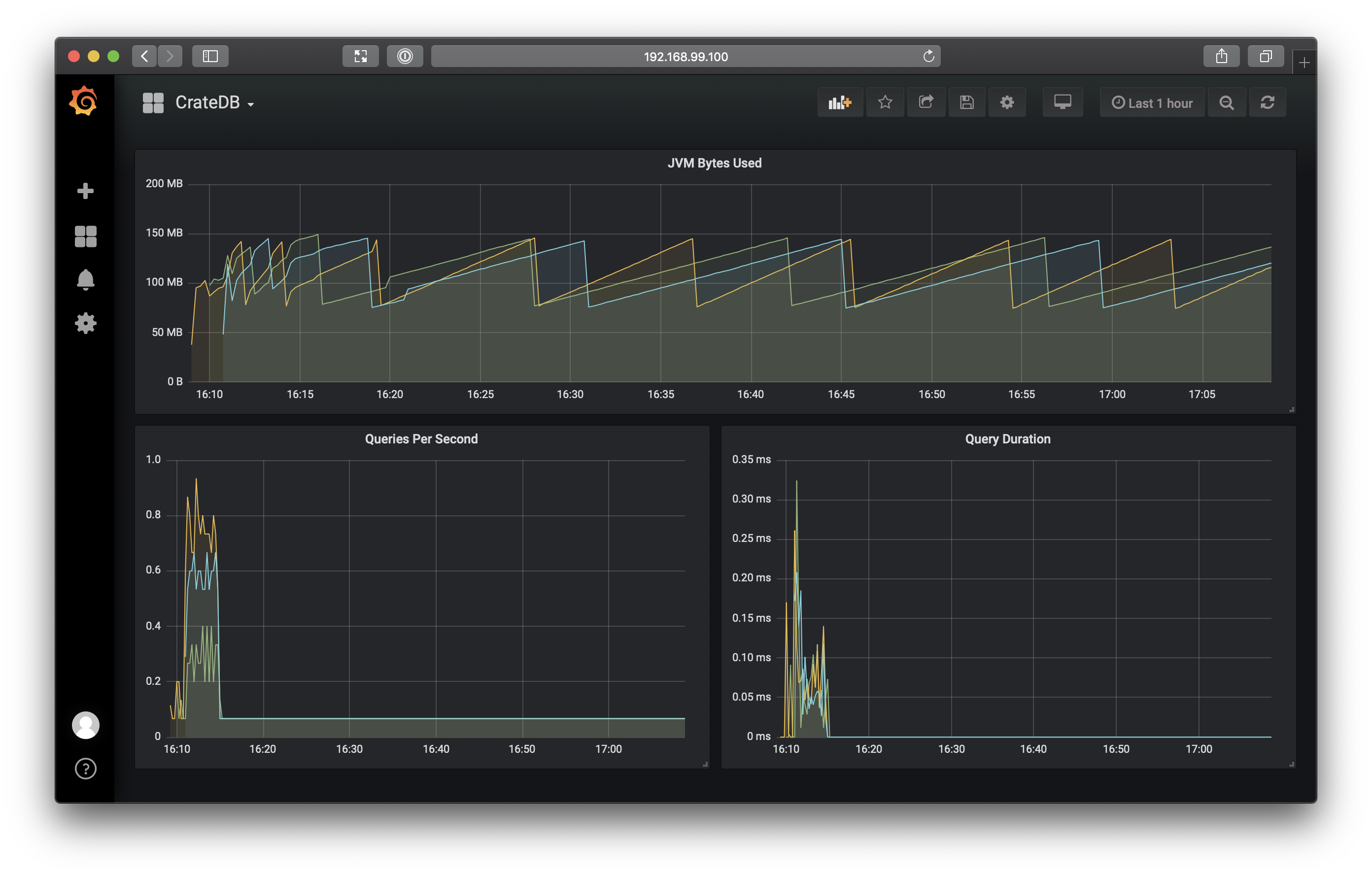 If you use the CrateDB admin UI to import some test data, you should see that new activity reflected on your dashboard: 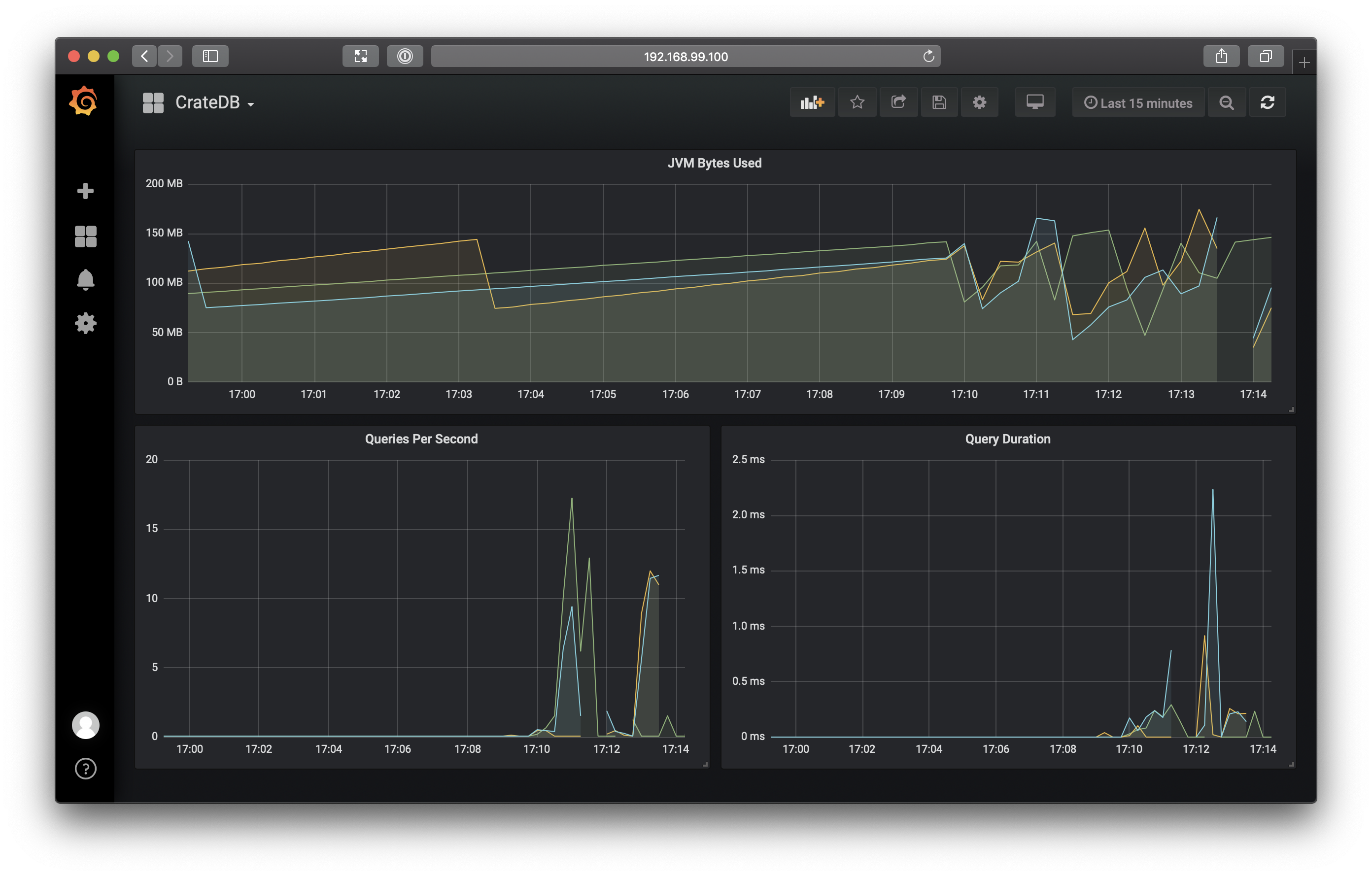 Note: I changed the dashboard time range from one hour to 15 minutes using the time range button in the top right-hand menu.

From here, you can start to expand your dashboard. In the two CrateDB queries above, you can change query="Overall" to query specific query types: SELECT, INSERT, UPDATE, and DELETE.

For example, to graph the average query execution time for inserts only, you could use this expression:

Finally, here's a screenshot from a real-world cluster: 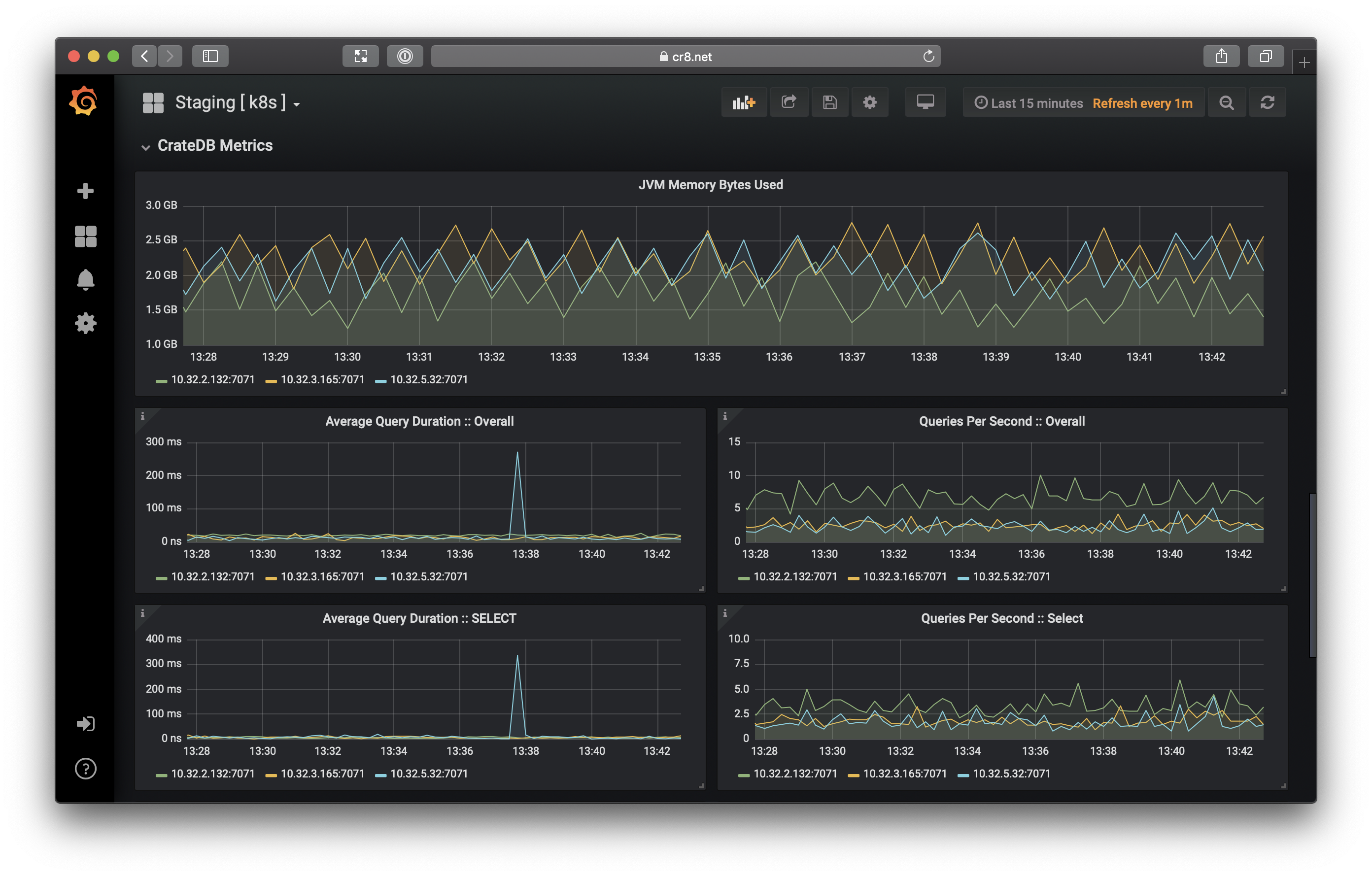