Crate.io Expands CrateDB Cloud with the Launch of CrateDB Edge

SAN FRANCISCO, Calif. – April 15, 2021 – Crate.io, developer and supplier of CrateDB, the purpose-built database optimized for machine data use cases, today announced the launch of CrateDB Edge. The new solution enables Crate.io customers to capture and analyze data at the data source, regardless of geographical location or whether there is cloud or internet accessibility. CrateDB Edge brings the capabilities of CrateDB Cloud – Crate.io’s managed database-as-a-service – to edge locations for the first time.
“CrateDB is an incredibly powerful database that is purpose-built for the unique characteristics and high-volume, high-scalability demands of machine data use cases,” says Bernd Dorn, CTO of Crate.io. “With the launch of CrateDB Edge, our database can be deployed, managed, and backed up through the same database management capabilities and functionalities that run within the cloud service. Data collection and edge analytics continue to be available, even when the internet connection gets interrupted. Deployments in remote locations can be managed centrally, including backup and replication. Many of our current customers require the flexibility to leverage CrateDB in hybrid scenarios, a mix of cloud and edge. CrateDB Edge is built exactly for these cases.”
Even as enterprises deploy database environments in the cloud, many – and particularly those with strict data security parameters or with distributed locations generating high-velocity data – require on-premises databases as part of a hybrid strategy. CrateDB Edge allows organizations to maintain full control over their infrastructure and still leverages CrateDB as an expertly-managed service. Customers can choose to deploy a cluster in their own region and operate it entirely on their own infrastructure, whether that is AWS, Azure, or on physical servers at their facilities. Kubernetes is the interface hosting the CrateDB Edge clusters; customers are in control of data through their CrateDB Cloud web interface. 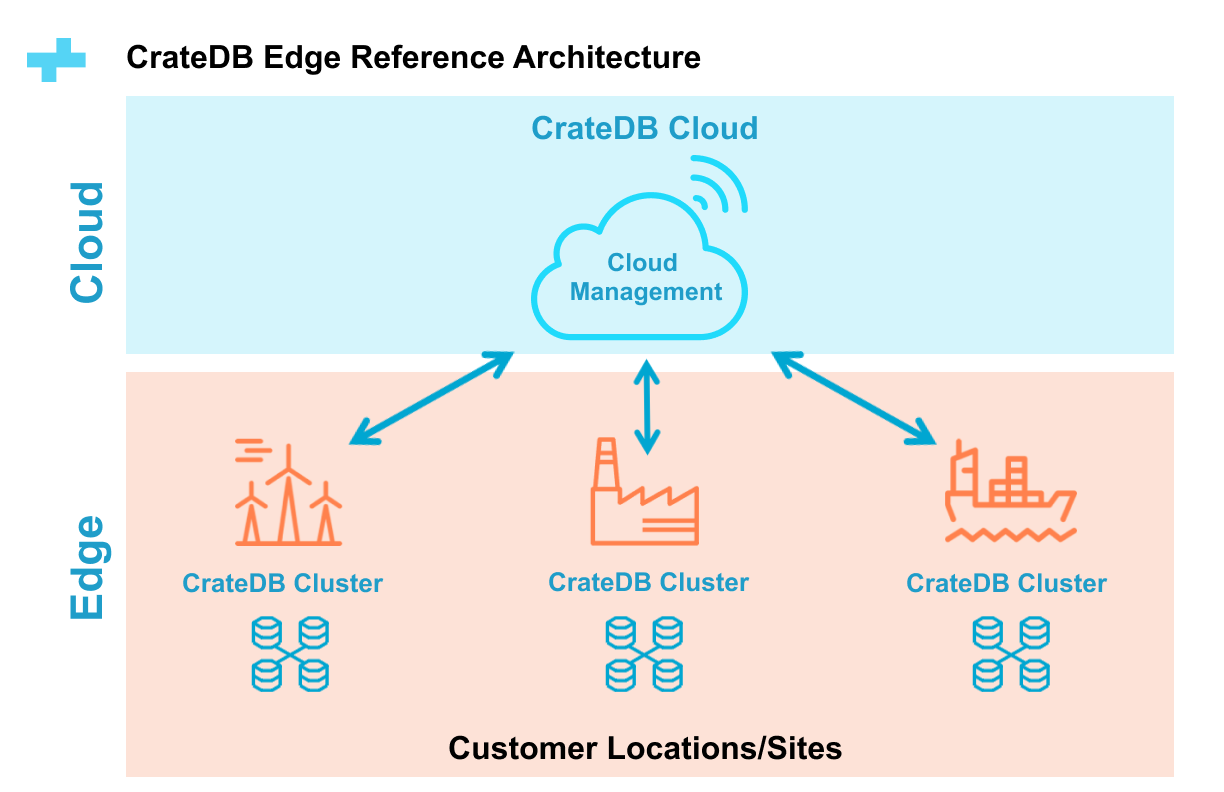 CrateDB Edge is built to deliver:
“We are excited about the benefits CrateDB Edge provides to customers; this is the next generation of database technologies that enable digitalization initiatives at scale,” says Eva Schönleitner, CEO of Crate.io. “For example, global industrial companies generating massive volumes of machine data in every plant can deploy a local cluster in each location. They get the freedom to utilize our CrateDB database on the edge and in the cloud, fully managed, backed up and synchronized – even for locations with inconsistent or intermittent internet connections. Combining these features with data ownership flexibility and Crate.io’s expertise managing and optimizing CrateDB for machine data, and we believe cloud-managed CrateDB Edge will be a very attractive solution for many organizations.”
Crate.io is inviting existing and new CrateDB users to join an early adopter program to pilot and implement lighthouse cloud- and edge use cases by visiting CrateDB Edge or sending an email to edge@crate.io.
About Crate.io
Crate.io is the developer of CrateDB, a highly scalable distributed open source database solution that combines the performance of NoSQL with the power and simplicity of standard SQL. Designed specifically to support machine data applications and IIoT, CrateDB is optimized for time series and industrial data and runs in the cloud on Azure and Amazon as well as on the edge and on-premise. Crate.io was founded in June 2013 and operates from its locations in the United States, Germany, Austria and Switzerland, as well as remotely worldwide.