How we scaled ingestion to one million rows per second

, by Niklas Schmidtmer
One of CrateDB’s key strengths is scalability. With a truly distributed architecture, CrateDB serves high ingest loads while maintaining sub-second reading performance in many scenarios. In this article, we want to explore the process of scaling ingestion throughput. While scaling, one can meet a number of challenges - which is why we set ourselves the goal of scaling to an ingest throughput of 1,000,000 rows/s. As CrateDB indexes all columns by default, we understand ingestion as the process of inserting data from a client into CrateDB, as well as indexing.

But this should not become yet another artificial benchmark, purely optimized at showing off numbers. Instead, we went with a representative use case and will discuss the challenges we met on the way to reaching the 1,000,000 rows/s throughput.

Besides the number of 1,000,000 rows/s, we set ourselves additional goals, to remain as close as possible to real-world applications:

The overall strategy to reach the throughput of 1,000,000 rows/s is relatively straightforward:

Let’s revisit at this point CrateDB’s architecture. In CrateDB, a table is broken down into shards, and shards are distributed equally across the nodes. The nodes form a fully meshed network. 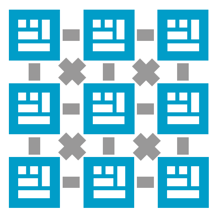 With that cluster architecture in mind, let’s break down the processing of a single INSERT statement:

Scenario 2.a is best from a performance perspective, but as each node holds an equal number of shards (number of total shards / number of nodes), scenario 2.b will be the more frequent one. Therefore, we have to expect a certain overhead factor when scaling and throughput will be lower than baseline throughput * number nodes.

Before running any benchmarks, the core question is: How to identify that a node/cluster has reached its optimal throughput?

The first good candidate to look at is CPU usage. CPU cycles are required for query handling (parsing, planning, executing queries) as well as for the actual indexing of data. A CPU usage in the range of consistently > 90% is a good first indicator that the cluster is well utilized and busy.

But looking at CPU usage alone can be misleading, as there is a fine line between well utilizing and overloading the cluster.
In CrateDB, each node has a number of thread pools for different operations, such as reading and writing data. A thread pool has a fixed number of threads that process operations. If no free thread is available, the request for a thread is rejected and the operation gets queued.

To reach the best possible throughput, we aim to keep threads fully utilized and have the queue of INSERT queries filled sufficiently. Threads should never be idle. However, we also don't want to overload the queue so that queueing time negatively impacts the throughput.

In our benchmarks, we will increase concurrent INSERT queries up to a maximum where no significant amount of rejections appear.

For a more permanent monitoring of rejected operations and several more metrics, take a look at CrateDB’s JMX monitoring as well as CrateDB and Prometheus for long-term metrics storage.

On the CrateDB side, the data model consists of a single table that stores CPU usage statistics from Unix-based operating systems. The data model was adopted from Timescale’s Time Series Benchmark Suite.

The tags column is a dynamic object which gets provided as a JSON document during ingest. This JSON document described the host on which the CPU metrics were captured.

One row consists of 10 numeric metrics, each modeled as top-level columns:

The number of shards will be determined later as part of the benchmarks. Replications (redundant data storage) are disabled so that we can measure the pure ingest performance.

All other table settings remain at their default values, which also means that all columns will get indexed.

To provision the infrastructure that our benchmark is running on, as well as generating the INSERT statements, we make use of two tools:

For CrateDB nodes, we chose m6g.4xlarge instances. Based on AWS' Graviton 2 ARM architecture, they provide powerful resources at a comparably low cost. With 16 CPU cores and 64 GB RAM, we try to get a high base throughput for a single node, and therefore keep the number of nodes low.

Each node has a separate disk containing CrateDB’s data directory, which we provision with 400 MiB/s throughput and 5000 IOPS, so that disks will not become a bottleneck.

Additionally, we spin up another EC2 instance that will run the Node.js ingest tool. The benchmark instance is an m6g.8xlarge instance. We do not actually require the 32 CPU cores and 128 GB RAM that it provides, but it is the smallest available instance type with a guaranteed network throughput of 12 Gbps.

To keep latency between the CrateDB cluster and the benchmark instance as low as possible, all of them are placed in the same subnet. We also configure the load balancer to be an internal one, so that all traffic remains within the subnet. 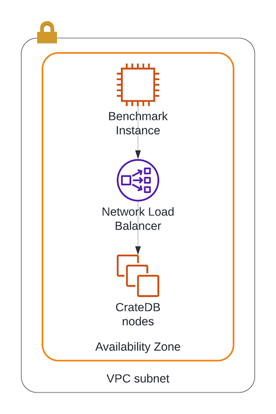 Each benchmark run is represented by a corresponding call of our nodeIngestBench client tool with the following call:

Let’s break down the meaning of each parameter:

We start simple with a single node deployment to determine the throughput baseline. As we have 16 CPU cores, we chose the same amount of shards. A single process with a concurrency of 16 queries shows a throughput of 171,242 rows/s.

We scale horizontally, by adding one additional node at a time. With each node, we also add another ingest client process to increase concurrency.

However, as indicated before, with every additional node, the node-to-node traffic also increases. Since this has a negative impact on the cluster-wide throughput, we cannot scale the ingest load in a strictly linear way. Instead, we observe the rejected thread pool count after each scaling and decrease the concurrent_requests parameter by one if needed.

Below are the full results, which also include all required information to reproduce the benchmark run on your own:

The max_rows parameter was reduced from 30 million rows per child process to 28 million rows for the 10 node cluster to remain within a runtime of five minutes. Overall, this leads to a table cardinality of 280 million rows, consuming 48 GiB of disk space (including indexes, after running OPTIMIZE TABLE). 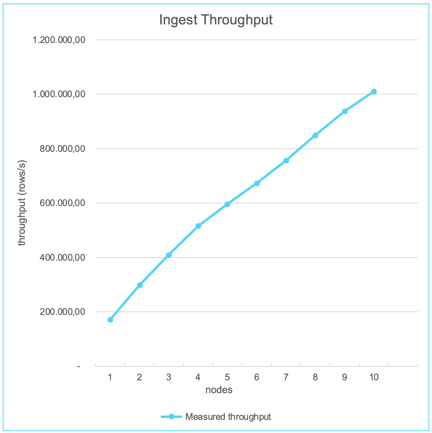 Ingest throughput on scaling from one to ten CrateDB nodes 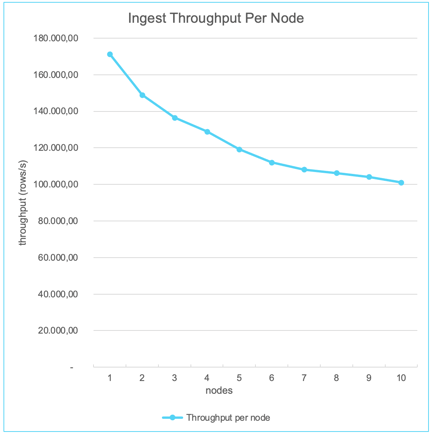 Our ingest scenario replicated a use case of 10 concurrently ingesting clients. Each sent seven queries in parallel and generated 28 million rows (280 million metrics) that were ingested at a (calculative) rate of slightly above one million rows per second.

With every additional node, we simulated the addition of another client process and saw a linear increase in throughput. With increasing cluster size, the throughput per node slightly decreased. This can be explained by the increasing distribution of data and the greater impact of node-to-node network traffic. Once a certain cluster size is reached, the impact of that effect becomes less. 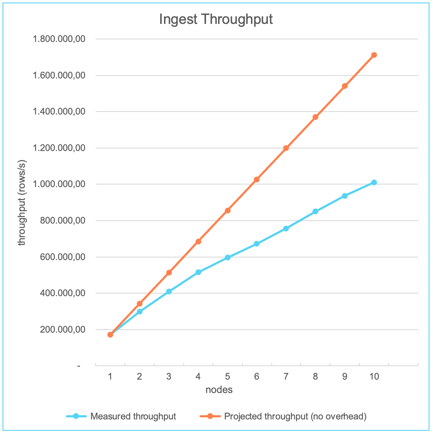 To take the node-to-node communication overhead into consideration, we reduce the projected throughput by 25% on each scaling (measured throughput before scaling * (1 + (0,75 * cluster size increase))): 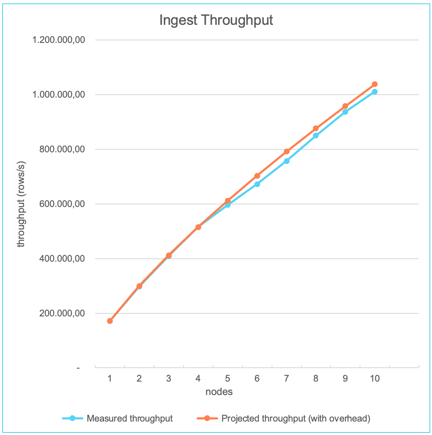 Measured and expected throughput now match very closely, indicating that on each scaling, 25% of the cluster size increase is taken up by the node-to-node communication.

Despite the overhead, our findings still clearly show that scaling a CrateDB cluster is an adequate measure to increase ingest throughput without having to sacrifice indexing.

We want to wrap up these results with a summary of the learnings we made throughout this process. They can serve as a checklist for your CrateDB ingest tuning as well: