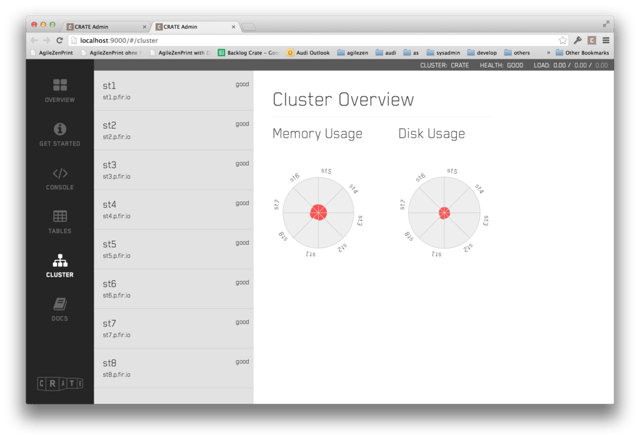 Now you can see the memory distribution and disk space of your cluster. The Coxcomb diagram provides a fast and easy overview. You might notice in the right corner of Chrome: The Chrome Extension of Conny, Christian and Manfred has been accepted by Google. Download it from the Chrome Webstore.

Today Christoph helped Mathias to add support for Ruby UDFs as well. Below you can find an easy sample for an Ruby UDF. 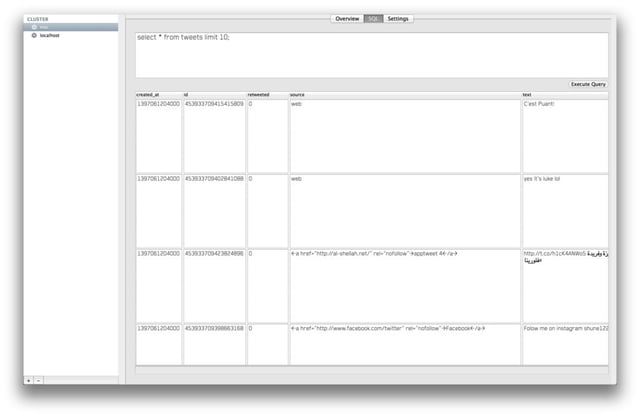 News from the OS X client: Display of results in a table, fullscreen support, health status, multiple windows and server connections. Our App Store Account is still waiting for approval.

Benchmarks can now be named and also work on multinode features. The COPY benchmarks against the two NUC clusters showed that the refresh_interval can have a huge impact on the cluster indexing performance. The generated reports can be exposed by an http server so the user can display and comparing graphs.

We built up two small NUC Clusters (2 Nodes each). NUCs are Intels latest Mini PCs. All four NUCs were configured with Intel 530 SSD drives (120GB mSATA). Two NUCs were powered by an i3 processor (and 8GB RAM), the remaining two NUCs had an i5 processor (16GB RAM). To test the performance we used a very simple data set. 80M records like below:

The results were similar: The i3 NUCs took 8,4 seconds, the i5 NUCs 6,6 seconds. The ganglia graphs showed that generally the CPU is the limiting factor and the SSDs still had enough IOPS available. We'll purchase a few more i5 NUCs and build larger cluster to do some more tests. Stay tuned!