Containerization is changing how organizations deploy and use software. You can now deploy almost any software reliably with just the docker run command. And with orchestration platforms like Kubernetes and DC/OS, even production deployments are easy to set up.

You may have already experimented with Docker, and have maybe run a few containers. But one thing you might not have much experience with is understanding how Docker containers behave under different loads.

Because Docker containers, from the outside, can look a lot like black boxes, it's not obvious to a lot of people how to go about getting runtime metrics and doing analysis.

In this post, we will set up a small CrateDB cluster with Docker and then go through some useful Docker commands that let us take a look at performance.

Let us start with a quick intro to CrateDB.

Set Up a CrateDB Docker Cluster

CrateDB is an open source, distributed SQL database that makes it simple to store and analyze massive amounts of machine data in real-time. It is horizontally scalable, highly available, and runs in fault tolerant clusters that work very well in virtualized and containerised environments.

You might already have a CrateDB Docker cluster that you can use. Or indeed, running Docker containers of any kind.

If you want to set up a small CrateDB cluster for the purposes of experimenting with performance metrics, you can follow this handy CrateDB Docker guide.

The main parameters of container performance analysis we're interested in for this post are CPU, memory, block I/O, and network I/O.

Docker provides multiple options to get these metrics:

However, metrics coverage across these three mechanisms is uneven.

For example, docker stats provides a top level picture of these resources which is enough for many users. While the cgroup pseudo files provides detailed analytics that can come in handy for a deep analysis of container performance.
I will discuss all three options.

Note that if you specify a stopped container, the command succeeds but there is no output.

To limit data to one or more specific containers, you can specify a list of container names or IDs, separated by a space.

Let's dig into each of those columns:

Next, let's take a look at the REST APIs exposed by Docker daemon.

The Docker daemon listens on unix:///var/run/docker.sock, which only allows local connections by the root user. When you launch Docker, however, you can bind it to a different port or socket.

Like docker stats, the REST API continuously reports a live stream of CPU, memory, and I/O data. However, the API provides longer, live-streaming chunks of JSON, with metrics about the container.

Here, replace CONTAINER_ID with the ID of the container you want to inspect.

You should receive a JSON stream. 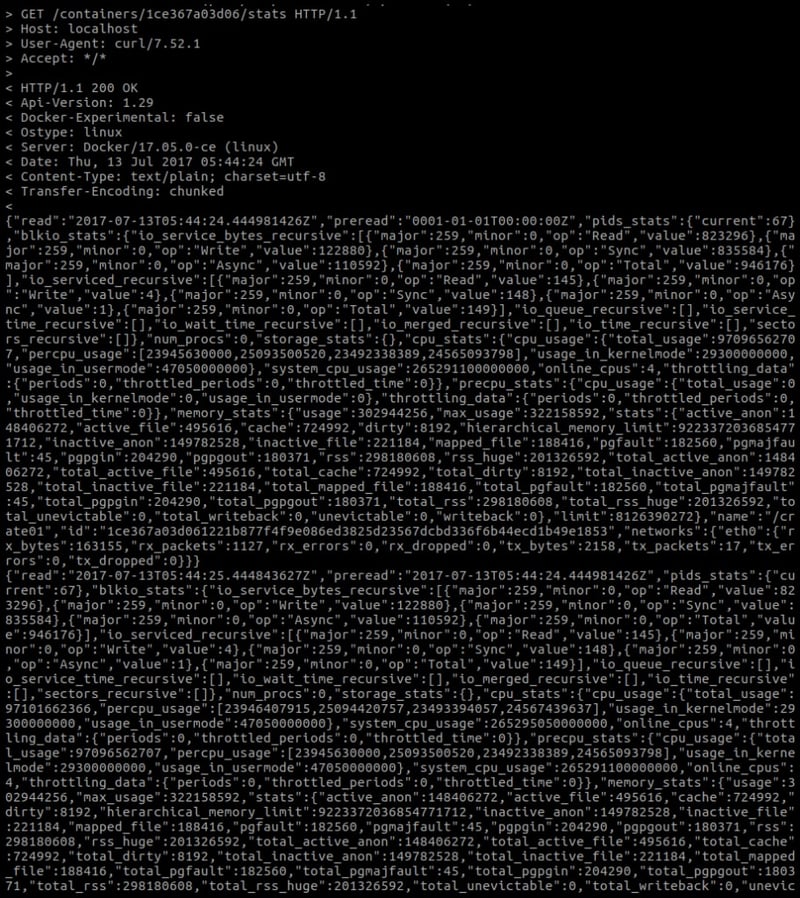 This is a bit of a mess. So let's run it through a JSON pretty printer and take a closer look.

There are several fields in the JSON data. For this post, we're only going to look at performance specific data.

Let's look at its keys, one by one.

The cpu_usage contains an object with the following keys:

Next up is system_cpu_usage. This value represents the host's cumulative CPU usage in nanoseconds. This includes user, system, and idle.

The online_cpus value represents the number of CPU core on the host machine.

CPU utilization is one of the key factors needed to judge the overall load on the system and as you can see above, the Docker daemon REST API provides comprehensive CPU usage stats, so you can monitor and adjust your deployment as needed.

Now, let's move on to to the memory_stats object:

There's a lot of data here, and we don't need to know what all of it means.

Here are the most important bits for getting started:

Next up is the blkio_stats object:

This object displays block I/O operations performed inside the container.

The io_service_bytes_recursive section contains the number of objects representing the bytes transferred to and from the container file system by the container, grouped by operation type.

cgroups pseudo files are the fastest way to read metrics from Docker containers.

cgroups pseudo files do not require root access by default, so you can simply write tools around these files without any extra fuss.

Also, if you are monitoring many containers per host, cgroups pseudo files are usually the best approach because of their lightweight resource footprint.

The location of cgroups pseudo files varies based on the host operating system. On Linux machines, they are generally under /sys/fs/cgroup. In some systems, they may be under /cgroup instead.

To access cgroups pseudo files, you need to include the long ID of your container in the access path.

You can set the $CONTAINER_ID environment variable to the long ID of the container you are monitoring, like so:

Here, replace CONTAINER_NAME with the name of your container.

Alternatively, you can set $CONTAINER_ID manually running docker ps --no-trunc and copying the long ID from the command output.

Now we have that environment variable set, let's explore few of the pseudo files to see what's there.

We can start with memory metrics.

You can find the memory metrics in the memory.stat file, located in a directory that looks like this:

The first half of the file has the statistics for processes in the container.

The second half of the file (entries starting with total_) has stats for all processes running in the container, including sub-cgroups within the container.

Entries in this file fall into two broad categories: gauges and counters.

Entries like cache are gauges, meaning they can increase or decrease indicating the current value. Other entries, like pgfault, are counters and can only increase.

Next, let's take a look at CPU metrics.

CPU metrics are contained in the cpuacct.stat file, which is located in the following directory:

This file shows us CPU usage, accumulated by the processes of the container. This is broken down into user and system time.

Next, let's explore the I/O stats in cgroup files.

Change into the directory:

This shows total count of I/O operations performed by the container under analysis.

This shows the total bytes transferred during all the I/O operations performed by the container.

Finally, let's look at how to extract network metrics from pseudo files. This is important as network metrics are not directly exposed by control groups. Instead, Docker provides per-interface metrics.

Since each container has a virtual ethernet interface, Docker lets you directly check the TX (transmit) and RX (receive) counters for this interface from inside the container.

Lets see how to do that.

First, fetch the PID of the process running inside the container:

Then read the file:

This shows you the data transfer details for the container's virtual interface eth0.

In this post we took a look at the docker stats command, the Docker REST API, and cgroups pseudo files.

We learnt that there are multiple ways to get statistics from a Docker container. Which method you use will depend on your setup.

While all these options are useful if you're planning to build your own tooling around Docker monitoring, there are several pre-built solutions, including Prometheus, cAdvisor, Scout, DataDog. We'll take a closer look at Docker health monitoring tools in the future.