This is a cross post and an English translation of the article "ALPLA setzt auf IoT-Datenverarbeitung im Discrete Manufacturing" by Christian Lutz and Nico Litzel published on Big Data Insider on January 29th 2021.

If you look in the refrigerator or the shower, at first glance you will probably find several products from the plastic bottle manufacturer ALPLA from Vorarlberg, Austria - from milk packaging to shampoo bottles. Sometimes they only differ from each other in tiny details. But until these products reach our households in their carefully considered plastic packaging, they have to travel a long way - even long before they reach a supermarket or drugstore. 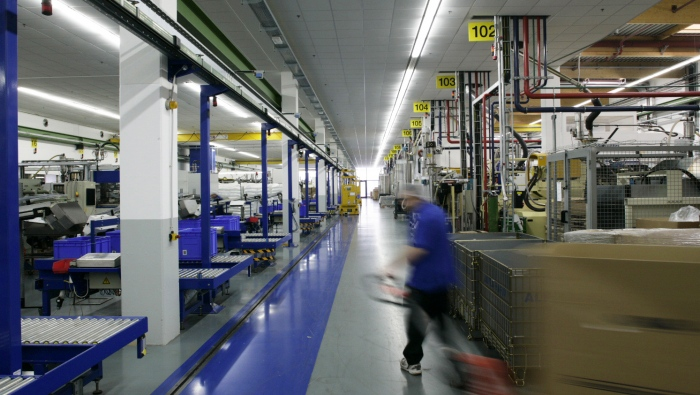 The manufacturing process is very complex - for what appears to be such a simple product in the end. But in addition to the safety of the product, both in terms of food safety and the risk of injury, it is above all about optimizing the use of materials. In other words: How optimal can the plastic construction be to meet all requirements and at the same time save as much material and effort in production as possible. The key word is therefore overall efficiency. To optimize overall equipment efficiency (OEE), data from tens of thousands of sensors with 900 different factory-specific types must be loaded. Since it is therefore impossible for a human to have an overview of this data in real time and to act quickly if something unexpected happens at one end of the chain, ALPLA started a pilot project in 2014 that focused on data-controlled production. The aim was to analyze the machine data in real time in order to send the correct information to the relevant employees in production, in order to react to errors and prevent problems. After connecting a few lines with several machines and adding the first other systems, the ALPLA team discovered that the database used could not keep up with the high write and read load at the same time and the system slowed down. In addition, the company wanted the data management platform used to be extended to the company's 181 production sites in 46 countries in the long term. However, this exceeded the size of the database in use by far.

But nobody thought of quitting. Neither reducing the amount of data nor deviating from the goal of wanting to have an overview of everything in real time were an option. Instead, alternatives were examined. The solution was ultimately very close: At that time, the still young company Crate.io was also based in Vorarlberg with an interesting product: a database with a strong focus on industrial data, scalability, efficiency, price and fast response times. After a few discussions, ALPLA decided on CrateDB. Later it turned out that this would be a win-win situation for both companies: While ALPLA was able to optimize its production, CrateDB could be adapted and further developed through this practical application even more closely to the requirements of industrial production.

A database for the IoT

CrateDB is a distributed SQL database that is based on a NoSQL architecture and can therefore use SQL for processing both structured and unstructured data types. The architecture also allows for horizontal scaling by interconnecting servers to collect millions of data per second and hundreds of terabytes of cluster size. Distributed processing, data partitioning and the in-memory indexes provide answers to time series queries in milliseconds. While most companies are looking for ways to use their own data sets - such as customer data, etc. - the industrial sector faces its own challenges. Conventional databases are not designed for industrial IoT environments and a flood of data from various sources such as machine sensors, workflow automation, ERP systems and other industry-specific applications. Limited flexibility, scalability and the lack of real-time information can become bottlenecks for industrial companies that want to improve their production processes "on the fly".

The distributed SQL technology from Crate.io, which was developed for industrial and IoT environments, makes intelligent systems and IoT platforms easier and more cost-effective to set up, scale and operate. The basic goal is that the use enables savings, both in terms of material and operating costs and a reduction in quality costs. In addition, there is process optimization as a very efficient tool for cross-plant optimization and the shortening of the time between the occurrence of a problem and the solution to the problem. The exact analysis of the location of the problem can e.g. For example, it is clear that there is a production jam on machine five, but the problem is already there at the beginning of the chain because a bottle is the wrong size.

Crate.io developed an IoT platform for ALPLA based on its CrateDB Cloud for Azure and the CrateDB Edge module. The solution offers a fully managed Database-as-a-Service with CrateDB and the Microsoft Azure IoT Suite. The greatest challenges here are making all the machine data available, also because there are regularly new data types that have to be made compatible and the updates of individual machines that have to work with each other must continue to be compatible with each other. To this end, innovations are installed while operations continue. The solution is standardized formats and clear definitions of interfaces.

CrateDB combines the simplicity of standard SQL (with Postgres driver) with the advantages of NoSQL to provide a central data repository for a variety of structured and unstructured information from sources such as sensors, ERP systems, quality assurance solutions, images and videos. The solution continuously collects process and production information, a data processing layer enriches the data in real time and analyzes it, and then the platform sends a warning with recommendations for action to an employee's mobile app and headset.

The use of the headset makes it possible to give employees acoustic notifications, so that they can find out in real time, even in the middle of another activity, whether there is a production jam somewhere else, whether there is a faulty bottle level, a machine is clogged or something else Intervention is required. All information is collected in central dashboards at the same time, so that from there the entire production remains at a glance with worldwide access.

CrateDB currently operates 15 factories with over 100 production lines in the United States, with global rollout to the other locations in over 40 countries starting in 2021. Ultimately, the solution will connect all ALPLA locations worldwide and expand them to include additional production and business processes. The sensors have all possible sizes and tasks, some are relatively simple, like a sensor that counts the products passing through. There are also sensors for quality assurance, image recognition for measuring processes, metal detectors that prevent metal from getting into the plastic bottles, sensors for material optimization and many more.

With a central IoT data store for practically all production data collected by the company, ALPLA is looking forward to connecting thousands of additional sensors per plant. By collecting more raw data , the company can take advantage of machine learning and artificial intelligence to predict problems instead of just reacting to them. ALPLA is also planning to expand the solution to other areas of the company. In doing so, it is an important step to equip employees for the new technology. ALPLA was determined to transform both its technology and its corporate culture in order to create a more data-driven organization. The CrateDB platform not only warns employees of a problem, but also sends out suggested solutions, which can include best practice checklists, photos, and even instructional videos. As a result, the system also offers optimized training for new employees. Crate.io and ALPLA believe that the solution will have far-reaching effects on the manufacturing industry, as it shows how a company with more than 180 plants worldwide can access real-time production data and modern analysis. Looking to the future, AI and machine learning provide employees with helpful tools and information they need to make the right decisions.