CrateDB and Docker are a great match thanks to CrateDB’s horizontally scalable shared-nothing architecture that lends itself well to containerization.

Kubernetes is an open-source container orchestration system for the management, deployment, and scaling of containerized systems.

Together, Docker and Kubernetes are a fantastic way to deploy and scale CrateDB.

This miniseries introduces you to Kubernetes and walks you through the process of setting up your first CrateDB cluster on your local machine.

An Introduction to Kubernetes

Internally, Kubernetes is a system of processes distributed across every node that makes up the Kubernetes cluster. This cluster must have at least one master node and may have any number of non-master (i.e., worker) nodes.

Containers (that run the actual software you want to deploy) are then distributed intelligently across the Kubernetes nodes.

A Kubernetes node has different Kubernetes components running on it, depending on the function of the node.

This way, Kubernetes can be thought of, not as a single thing, but as multiple instances of these five components coordinating across multiple machines.

Now that we’ve established what Kubernetes is, we can look at the concepts that are used to define the state of a Kubernetes cluster.

Arguably the most important of these concepts is a pod.

For Kubernetes, a pod is the foundational building block of any system.

If you are deploying a web application, for example, a pod would run a single instance of your application.

The official CrateDB Docker image works well as a single container pod. These CrateDB pods can then be combined to produce a CrateDB cluster of any size.

In summary, pods are ephemeral, disposable environments that run one or more related containers. They are the foundational Kubernetes building block, and Kubernetes primarily concerns itself with pod scheduling, node assignment, and monitoring.

You do not usually create pods by hand. Instead, you use a controller to create them.

A controller is an entity within Kubernetes than manages a set of pods for you according to your specification.

For example, a DaemonSet is a controller that ensures that all nodes in the Kubernetes cluster run a single copy of the defined pod. DaemonSets can be useful for running things like a log collection daemon like fluentd.

Another commonly used controller is the ReplicaSet, which ensures that a specified number of pod replicas are running at any given time.

You could run a CrateDB cluster with a ReplicaSet, but you would quickly run into the problem of state.

Ideally, containers should be stateless. That is, they should not have a fixed identity within your system. It shouldn't matter if a container is destroyed, recreated, moved to another node, or whatever—as long as the desired number of containers are running.

Stateless containers are suitable for web applications that persist state to an external database. However, databases themselves require persistent storage. You don't want your data to vanish because a container was rescheduled!

Besides, a CrateDB cluster requires stable network identities so that CrateDB can manage shard allocation.

Fortunately, Kubernetes provides the StatefulSet controller which gives each pod a fixed identity and storage that persists across restarts and rescheduling. That is, the controller creates all of the pods within a StatefulSet from the same template, but they are not interchangeable.

That's just the ticket for our purposes.

So far we've got pods, which house one or more related containers. Also, we have controllers, which create and destroy pods according to our specifications. We can even have pods with persistent storage.

However, because the pods can be stopped, started, and rescheduled to any Kubernetes node, assigned IP addresses may change over time. Changing IP addresses are the sort of thing we don't want client applications to have to handle.

To solve this problem, we use services.

A service provides a static interface to access one or more pods.

The three most commonly used services are:

For our purposes, we want to create a LoadBalancer service that balances incoming queries across the whole CrateDB cluster.

Enough of the theory! Let's dive in and put this knowledge into practice.

By the time you've finished this section, you should have a simple three-node CrateDB cluster running on Kubernetes.

For this tutorial you need to install:

This tutorial uses these three pieces of software to create and interact with Kubernetes cluster running inside a virtual machine.

Once you have all three installed, you can continue.

You don't need to worry about downloading disk images and setting up virtual machines manually. As long as you have a compatible hypervisor like VirtualBox installed on your system, Minikube detects it and set the whole thing up for you automatically.

Get started by running the following command:

Here, we passed in --memory 4096 because Minikube assigns 1GB of memory for the virtual machine by default. However, we want more than that for our cluster.

Feel free to change this if you need to.

Minikube automatically configures kubectl to use the newly created Kubernetes cluster. To verify this, and to ensure the cluster is ready to use, run this command:

Great! The cluster is up and running.

Namespaces provide a shared environment for objects, and these environments are isolated from other namespaces.

Kubernetes configures a new cluster with some initial namespaces.

Let's look at these namespaces in detail:

If you inspect the list of pods running in the kube-system namespace, you can see the Kubernetes components we covered earlier:

Before we continue, let's create a namespace for our CrateDB cluster resources.

Technically, we don't require namespaces for what we're doing. However, it's worthwhile using namespaces, to familiarize yourself with them.

The newly created namespace should show up, like this:

From now on, when we pass --namespace crate to kubectl when creating or modifying resources used by our CrateDB cluster.

For CrateDB to work, each CrateDB node should be able to discover and communicate with the other nodes in the cluster.

Kubernetes creates SRV records for each matching pod. We can use those records in a subsequent step to configure CrateDB unicast host discovery.

We need to expose our pods externally so that clients may query CrateDB.

Fortunately, however, Minikube mocks out a load balancer for us. So we can happily use LoadBalancer services locally.

Phew! That's a lot. Let's break it down:

Save the file and then create the controller, like so:

The StatefulSet controller brings up the CrateDB pods one by one. You can monitor the progress with this command:

Keep running this command until you see something like this:

Once you see this, all three pods are running, and your CrateDB cluster is ready!

Before you can access CrateDB, you need to inspect the running services:

Because of a Minicube quirk, the external IP is always pending. To get around this, we can ask Minicube to list the services instead:

Because of a Minicube issue, for now, the http:// prefix is added regardless of the actual network protocol in use, which happens to be right for the CrateDB HTTP port, but is not correct for the PostgreSQL wire protocol port.

The port we're interested in for this tutorial is the HTTP port, which is 31159. You can verify that this port is open and functioning as expected by issuing a simple HTTP request via the command line:

Great! This is the HTTP API response we expect.

You should see the CrateDB Admin UI: 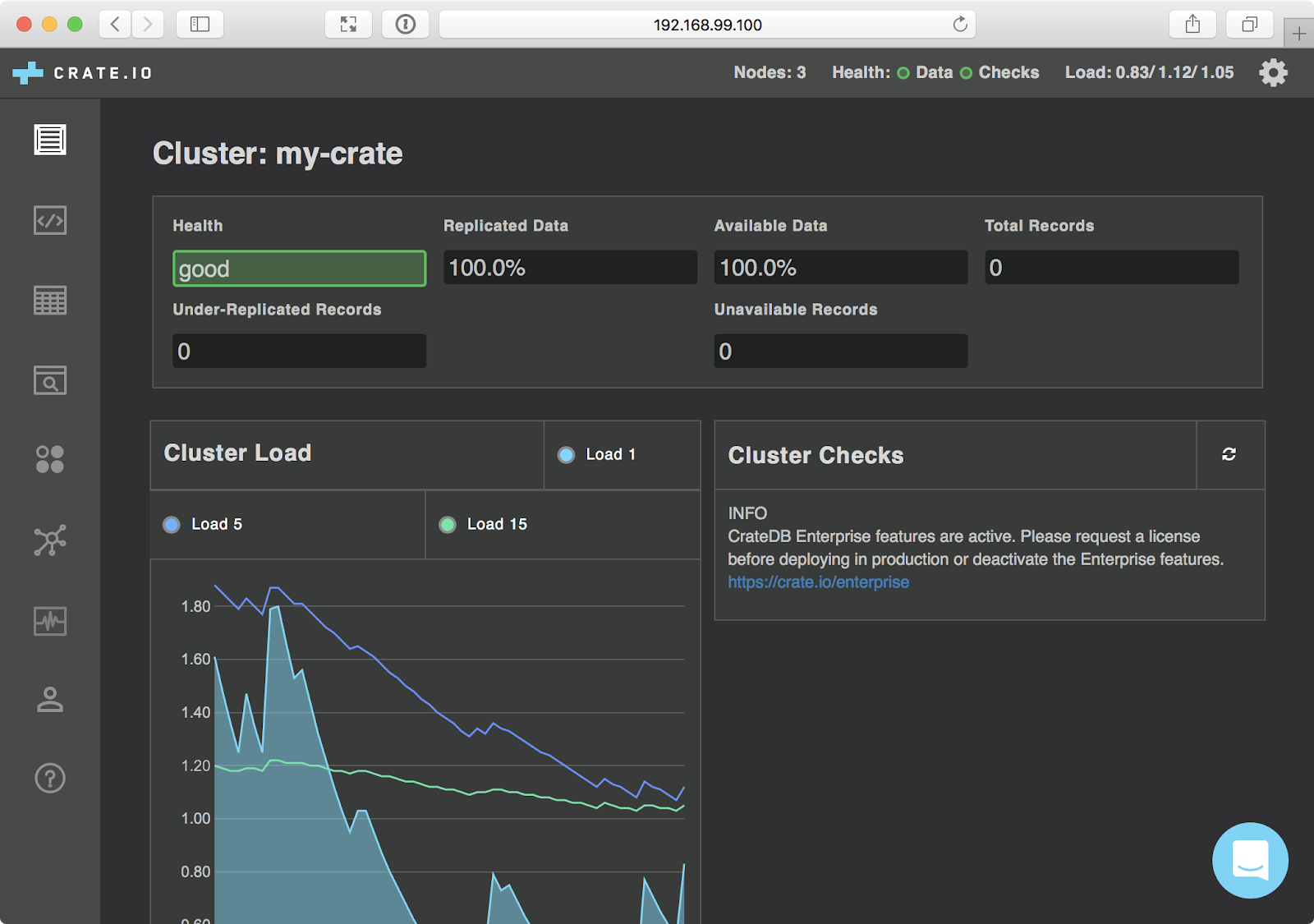 Select the Cluster screen from the left-hand navigation menu, and you should see something that looks like this: 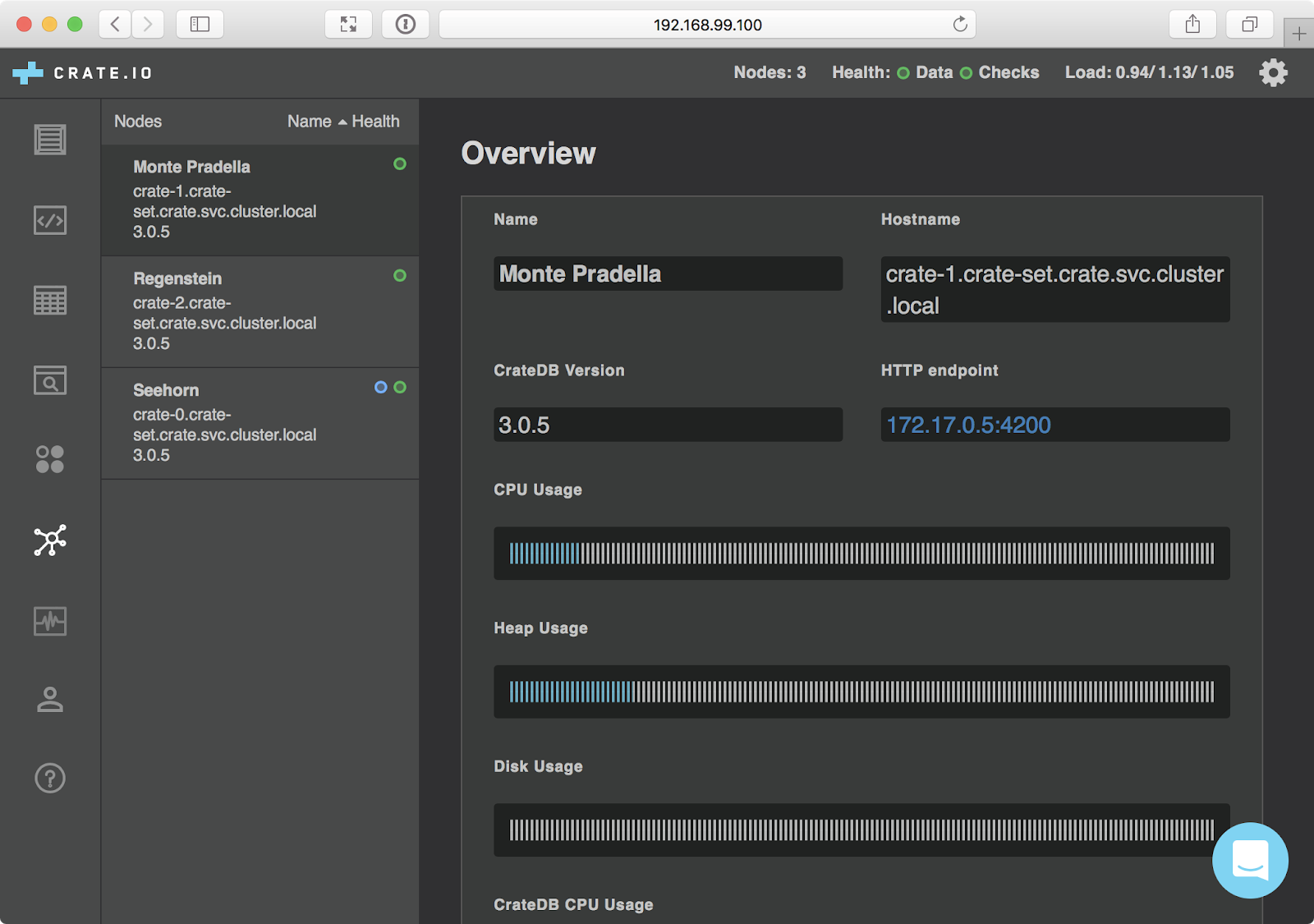 Here you can see that our CrateDB cluster has three nodes, as expected.

If this is your first time using CrateDB, you should check out the Getting Started guide for help importing test data and running your first query.

When you're done, you can stop Minikube, like so:

In this post, we went over the basics of Kubernetes and created a simple three-node CrateDB cluster with Kubernetes on a single virtual machine.

This setup is a good starting point for a local testing environment. However, we can improve it. An excellent place to start is with storage.

CrateDB nodes are writing their data to a RAM drive, which is no good if we want our data to survive a power cycle.

Part two of this miniseries shows you how to configure non-volatile storage and how to scale your cluster.