The CrateDB query execution pipeline used to be push based. But over time, we ran into problems with this approach. It made the code complex and hard to work with, and it was limiting the sorts of join algorithms we could implement.

To fix those problems, and to open up the possibility of implementing more efficient join algorithms, the past couple of weeks my team and I have spent some time overhauling the execution pipeline.

In this post, I’ll briefly introduce you to the problem we were trying to solve, and how we went about solving it.

What do I mean when I say that the query execution pipeline was push based?

Well, it means that we had some kind of data source—either on disk, in memory, or held remotely—and then a component (that we call a CrateCollector, or just a collector for short) would read that source and feed the data, row by row, into a different component.

We called this receiving component the RowReceiver. RowReceiver components can then be chained, to construct projections. Projections are then used for all sorts of things. For example: evaluating a scalar function, filtering rows, limiting rows, grouping with aggregation, and so on.

On a high level, RowReceiver components are handled like this:

Here, we can see that RowReceiver will be fed rows from the memory source until we run out of rows or until the setNextRow() returns false.

If we’re implementing a filtering component, the implementation of setNextRow() might look a little something like this:

Here, if the matches() function returns true, we call setNextRow() on the next RowReceiver in the chain, effectively allowing the row to be set. Otherwise, we skip the row.

Thing Start To Get Tricky

This is a problem because while a RowReceiver component is waiting to complete these write operations, data is being continuously pushed into it. And there is a real risk that its buffer would fill up.

To solve this, we had to figure out a way to apply back pressure to (i.e. intentionally slow down) the chain of RowReceiver components.

The way we solved this initially was to modify the RowReceiver interface.

Instead of returning true or false, we changed setNextRow() so that it returned a Result enum. This enum could be one of three values: CONTINUE, PAUSE or STOP.

The PAUSE value would indicate that the upstream should stop calling setNextRow() until it was told to resume.

In order to provide the downstream a way to resume the upstream we added a pauseProcessed() method with a ResumeHandle. This ResumeHandle in turn has a single function, named resume().

Here’s a simplified diagram of how this works: 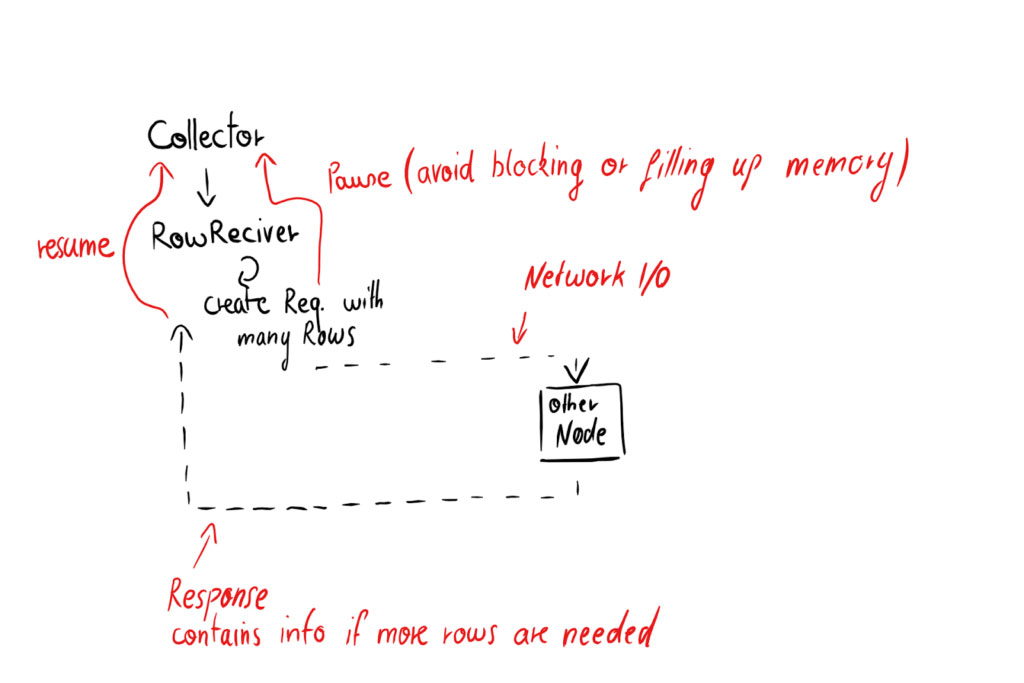 Things Start To Get Even More Tricky

This architecture we outlined in the previous section served us well, until we started to implement joins.

We started our work on joins by implementing the nested loop algorithm. Although it is suboptimal in many cases, it is the simplest algorithm, and can be used for all join variants (and with extensions, even outer joins).

But how does this work with our push based data flow?

Well, for starters, one aspect of the nested loop is that the right side is enumerated for every row on the left side. So, to enable that, we need a way to tell the upstream RowReceiver to send all the data again.

To accomplish this, we added a RepeatHandle with a repeat() method.

And then we implemented a NestedLoopOperation which had two RowReceiver components, one for the left side, one for the right side.

Despite the name, both of these RowReceiver components have to run in parallel, receiving rows concurrently, and are then synchronised. This counter-intuitive constraint is because CrateDB query execution is push based and distributed across multiple nodes. So the component implementing the nested loop algorithm isn’t necessarily on the same node as the row collectors.

And this is where things started to get complicated, because of the many possible states that need to be handled. 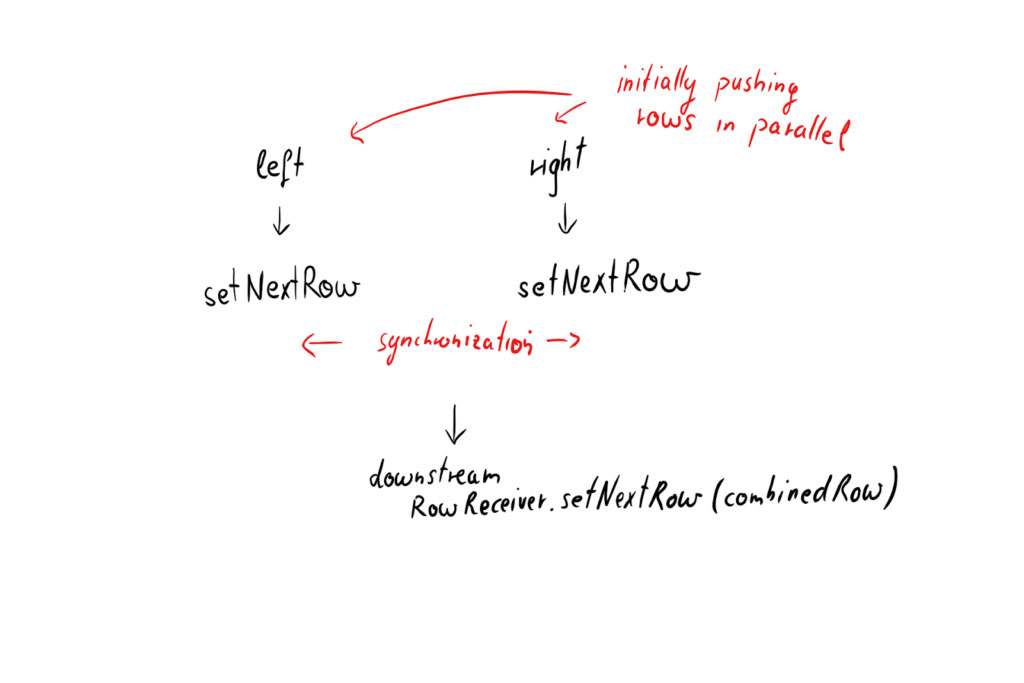 We eventually managed to tackle this complexity, but it only became worse once we added support for left, right, and full outer joins.

The increase in complexity was due to the fact that extra can rows are created. For example, in the left join case, after each right iteration, a row where the right side is null is created if there was no match.

The code from before evolved into something like this (simplified):

Looking for a Solution

With all the complexity our approach introduced, we ran into quite a few bugs.

We managed to iron out the bugs eventually, but we didn’t feel comfortable adding any additional join algorithms. Which was a problem, because, as I mentioned previously, the nested loop algorithm is one of the least efficient.

So, we started to look for a way we could reduce complexity.

Unfortunately, while using an in-memory structure would be simplest to implement, it would also mean that joins could only be done over row sets that fit into memory.

Given that the nested loop algorithm should eventually function as the fallback algorithm that we use when more efficient algorithms (currently not implemented) are not possible, and the massive datasets that CrateDB is designed to work with, we had to reject this approach.

This left us with the second option: pull-based execution architecture.

From Push to Pull

Once we’d settled on moving to a pull-based execution architecture, we started evaluating different approaches.

We had a few simple requirements:

The first two requirements dictated batch-style row processing. It also ruled out re-using any existing interfaces like Stream or Iterable, as these don't support non-blocking operations.

What we eventually ended up with is a bit of a mix between Iterable, Iterator, and what could be described as cursor.

We call it BatchIterator, and it looks like this:

The way this is used is still similar to before. We have a source, and then we have projections which transform this source. But instead of the component doing the projection being a RowReceiver, these are now a series of nested BatchIterator components.

In this example, source, filter, grouping, and limit are all BatchIterator components.

A BatchConsumer component will then receive this projected BatchIterator and consume it’s data. Either to transmit the data to another node in the cluster, or to a client, to provide the requested result.

Overall, the complexity of many CrateDB components decreased, so the work has been a success. And now we have this sorted, we’ve opened up the possibility of implementing more efficient join algorithms, like sort-merge join or hash join.