This post is the final part of a three-part miniseries that looks at how we improved join performance in the CrateDB 3.0 release.

In part one of this miniseries, I went over the reasons we chose to implement the hash join algorithm as an alternative to the nested loop algorithm. With that initial set of changes in place, we were able to make joins up to two thousand times faster.

In part two, I explained how we addressed the memory limitations of the basic hash join algorithm with a switch to block-based processing. That is, dividing a large dataset up into smaller blocks that can be worked on separately. On top of that, we managed to improve our performance by an average of 50% by switching the joined tables so that the smaller table is on the right-hand side.

This brings us to the final set of changes.

With the work so far, the CrateDB node that handles the client request is responsible for planning and executing the entire join.

However, because we now have blocks that can be worked on separately, we can, in theory, distribute those blocks across the CrateDB cluster and execute the join in parallel using multiple nodes for increased performance and load distribution.

To put it another way, what we needed to do was modify our existing implementation so that it (as evenly as possible) distributes the work required for the block hash join.

In this post, I will show you how we modified our existing work to create a distributed block hash join algorithm. I will then present the results of our final benchmarks.

Please note: join algorithms and their performance characteristics are common knowledge for RDBMS developers. This miniseries is written for people who want a behind the scenes look as we implement these algorithms and adapt them for CrateDB and our distributed SQL query execution engine.

We identified two candidate approaches for this work:

In this section, I will explain each approach, and then present the results of our prototyping benchmarks.

In an ideal situation, a CrateDB table is split up into primary shards that are distributed evenly across each node in the cluster.

If we have a table with eight shards, and a cluster with three nodes, we might expect a distribution that looks like this:

Ideally, tables also have replication configured, which means that each primary shard should have one or more replicas, which can also be used for read operations. However, I have omitted this from the diagram above to keep the explanation simple.

If you are joining two tables, you have two such tables, and two sets of shards that are distributed across the cluster.

For distributed query execution, ideally, each node in the cluster should perform a portion of the work required for the join.

One of the consequences of the block hash join algorithm (as detailed in part two) is that the left (outer) table is split into blocks and the right (inner) table must be read once for every block. To minimize the total number of rows read, we swap the tables if necessary to ensure that the right-hand table is the smallest of the two.

So, for the locality approach, each node must:

Partial result sets are then transmitted to the handling node for merging and further processing (e.g., applying operations like ORDER BY, LIMIT, OFFSET, and so on) before being returned to the client. 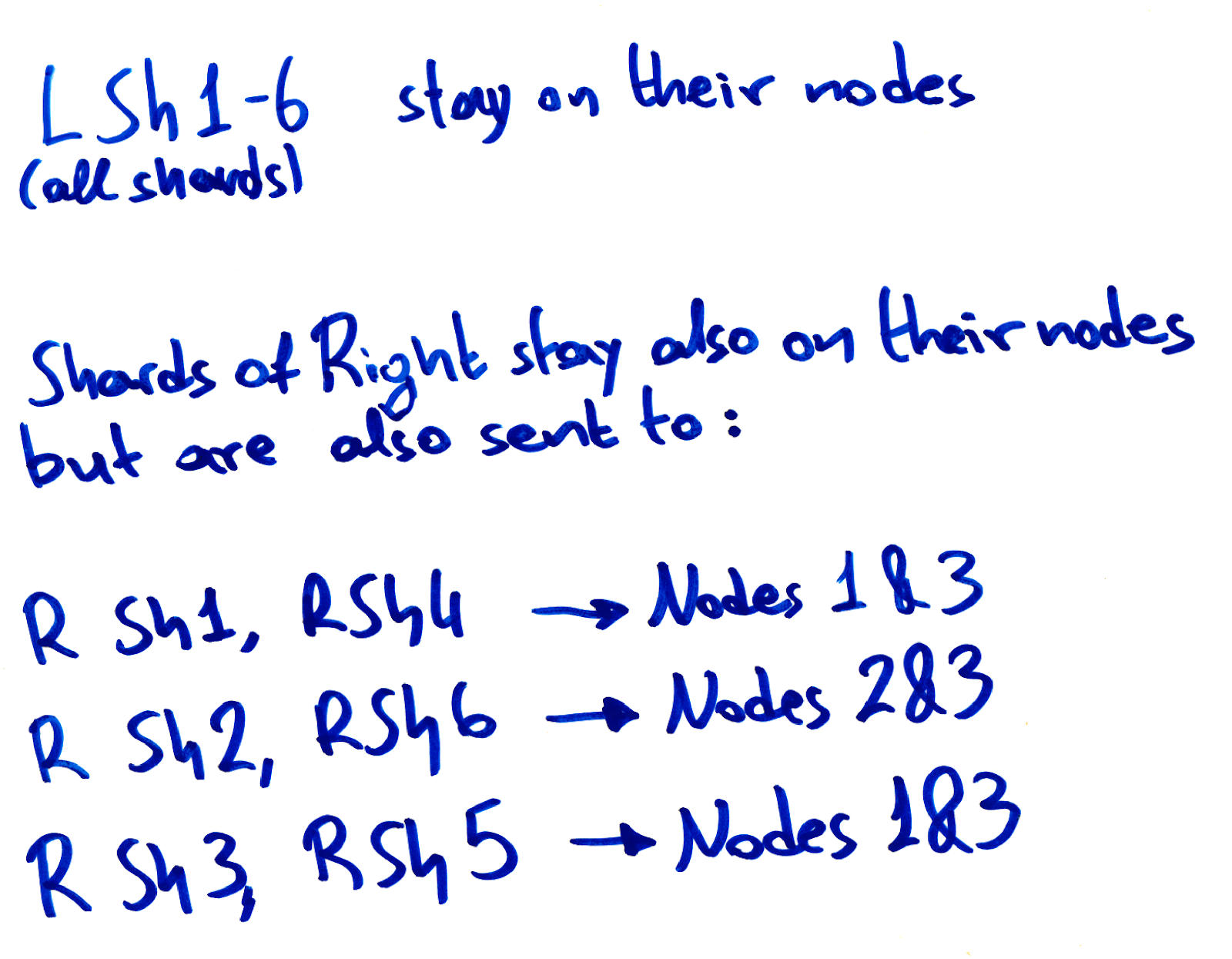 The basic idea is that every node produces a hash for every local row in every local shard for both tables participating in the join. This hashing is done in a way that ensures that matching rows will have a matching hash. We then modulo the hashes to partition the matching rows across the cluster.

As discussed in part one, we're interested in equality operators. So in this example, this is what we care about:

Because we're using an equality operator, matching rows from t1 and t2 will have identical hashes.

From here, we can assign each row to a node using the modulo operator, like so:

Statistically speaking, the modulo operator will assign approximately the same number of rows to each node in the cluster.

So, to summarize, for the modulo distribution approach, each node must:

As before, partial result sets are then transmitted to the handling node for merging and further processing before being returned to the client. 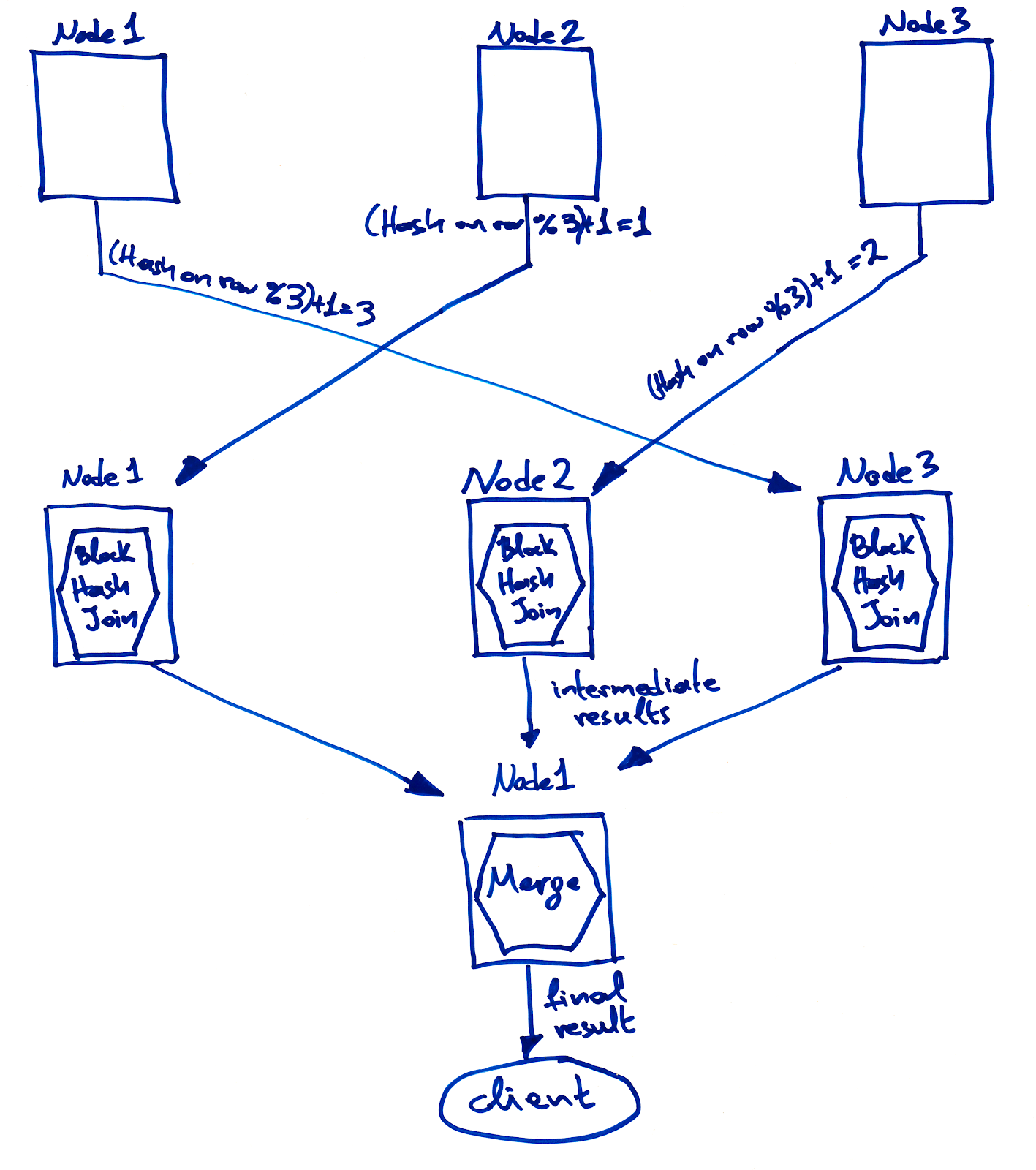 To test the two approaches we benchmarked two prototyped implementations on a five node CrateDB cluster.

We ran the following query:

Here's what we saw:

From this, we can observe that:

This was in line with what we were expecting, for two reasons:

With these results in hand, we decided to go with the modulo distribution approach.

Thankfully for us, CrateDB's existing distributed query infrastructure made light work of this implementation, so details of the code changes we made can be skipped for this post.

We identified one potential issue during implementation.

If you are joining a subselect, and that subselect has a LIMIT or an OFFSET clause, the distributed algorithm may perform worse than the single-node version.

To understand why let's take an example query:

When a single node is executing this query, it only needs to collect 100 rows for t1 before being able to complete subselect and proceed with the join. 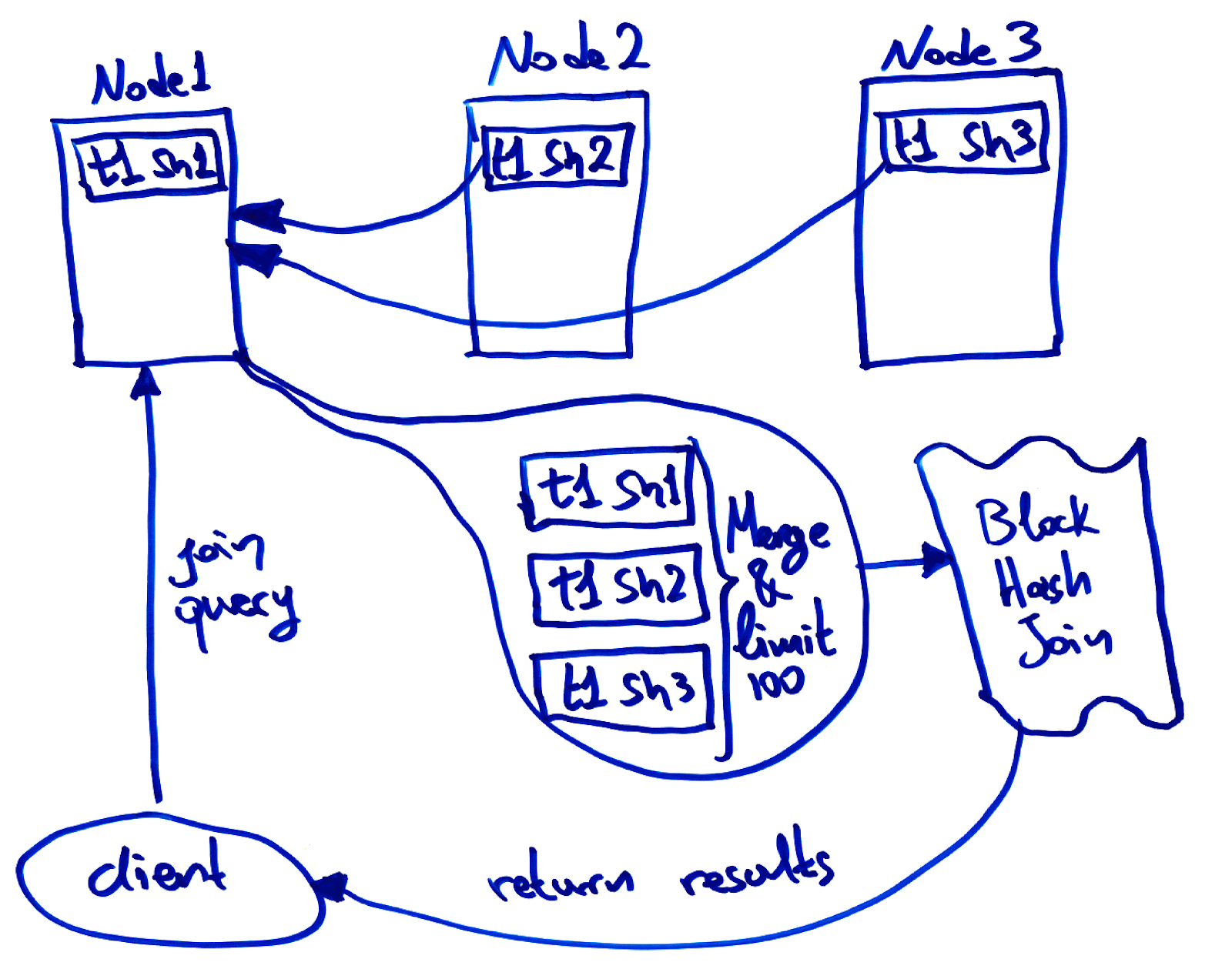 However, we can't do this with the distributed block hash join algorithm, because each node is only processing a subset of the data.

We decided this was out of the scope for this work, and so instead we applied a limitation so that the single-node version of the block hash join algorithm is used instead of the distributed version for any query joining a subselect with a LIMIT or an OFFSET.

With the implementation of the distributed block hash join algorithm complete, we performed a final set of benchmarks to compare it with the single-node version.

Like before, we used a five node CrateDB cluster.

This time, we created two tables, t1 and t2, configured with five primary shards each and no replica shards.

For the first test iteration, both tables started out with 10 thousand rows, and this was increased for every subsequent iteration.

For each iteration, we tested two queries using three algorithms:

The first query matches all rows:

The second query was designed to match one-fifth of all rows using a second column that was populated accordingly:

Every combination of query, table size, and algorithm was run multiple times and the average execution time was taken.

The results were as follows:

Note: tests marked N/A ran for too long and were terminated.

From this, we can observe that:

We didn't want to stop here. So, we devised some additional benchmarks.

Specifically, we used the same basic setup for the tests, but this time we ran the queries individually and then 10 times simultaneously to simulate multiple concurrent users. We also increased the size of the test tables in steps.

The results were as follows:

Interpreting these results is more subjective because we're not comparing them with any previous results. We are, however, happy with this performance profile because many of the typical real-world CrateDB deployments have tables with millions of rows.

In this post, I showed you how we took the block hash join algorithm and modified it to run in parallel on multiple nodes.

We shipped this work in CrateDB 3.0, and the result is that inner joins with equality operators are significantly faster in all cases.

23 thousand times faster in some cases.

There are some potential improvements we could make:

We don't have anything roadmapped at the moment, but as always, stay tuned. And if you have suggestions for further improvements we could make, or you would like to contribute to CrateDB and make improvements yourself, please get in touch!