After two years in preview, Amazon Timestream is now out in the world.

Timestream is Amazon's new offering for time-series data, aimed to target IoT use-cases, DevOps, and analytics apps. They promise a performance up to 1,000 faster than relational databases for 1/10th the cost. They also offer the possibility to easily query and store hot and cold data, with automatic scaling, simple accessibility, and (of course) specific time-series functions: on-the-fly aggregations, window functions, and arrays.

With the goal of testing how CrateDB stands in comparison with the other databases in the market (you can read about our previous comparisons here and here), we gave Amazon Timestream a try. As developers, we were also very curious to be able to finally check it out.

In this blogpost, we summarize both our impressions and the data we collected, comparing how both CrateDB and Timestream perform against a heavy IoT workload. More specifically, we simulated an industrial IoT use case - just as we did when we tested MongoDB, TimescaleDB and Influx.

We were especially curious to know:

Let's get into it.

Since CrateDB is a database strongly focused on industrial use cases, we simulated an industrial IoT project, as we usually do in our comparisons:

AWS Timestream still does not offer different tiers of deployments, so to set it up was easy: we simply created a Service.

Their pricing is based on usage:

As we said before, it is important to populate the database with data before starting the ingest, in order to get an accurate representation of its performance in the real-world.

An immediate issue we found is that there was a quota limiting the insert to 100 records per insert. This required additional logic to the code, also reducing the batch insert benefits.

Trying to improve AWS Timestream ingest speed, we run it a second time. We split the data generator into 20 instances running in parallel directly in AWS. With this setup, we achieved ~10,800 metrics per second. This corresponds to an average of ~540 metrics/s per client.

After 3 days of data ingestion, our dataset already consisted of about 2 billion metrics, and we decided to try out some queries.

To run the queries, we used a similar setup than last time:

(To review the CrateDB variants of the query, check out our previous comparisons - here and here).

The results we got are summarized in the table and figures below, showing the percentile value for 50% and 99% of the queries: 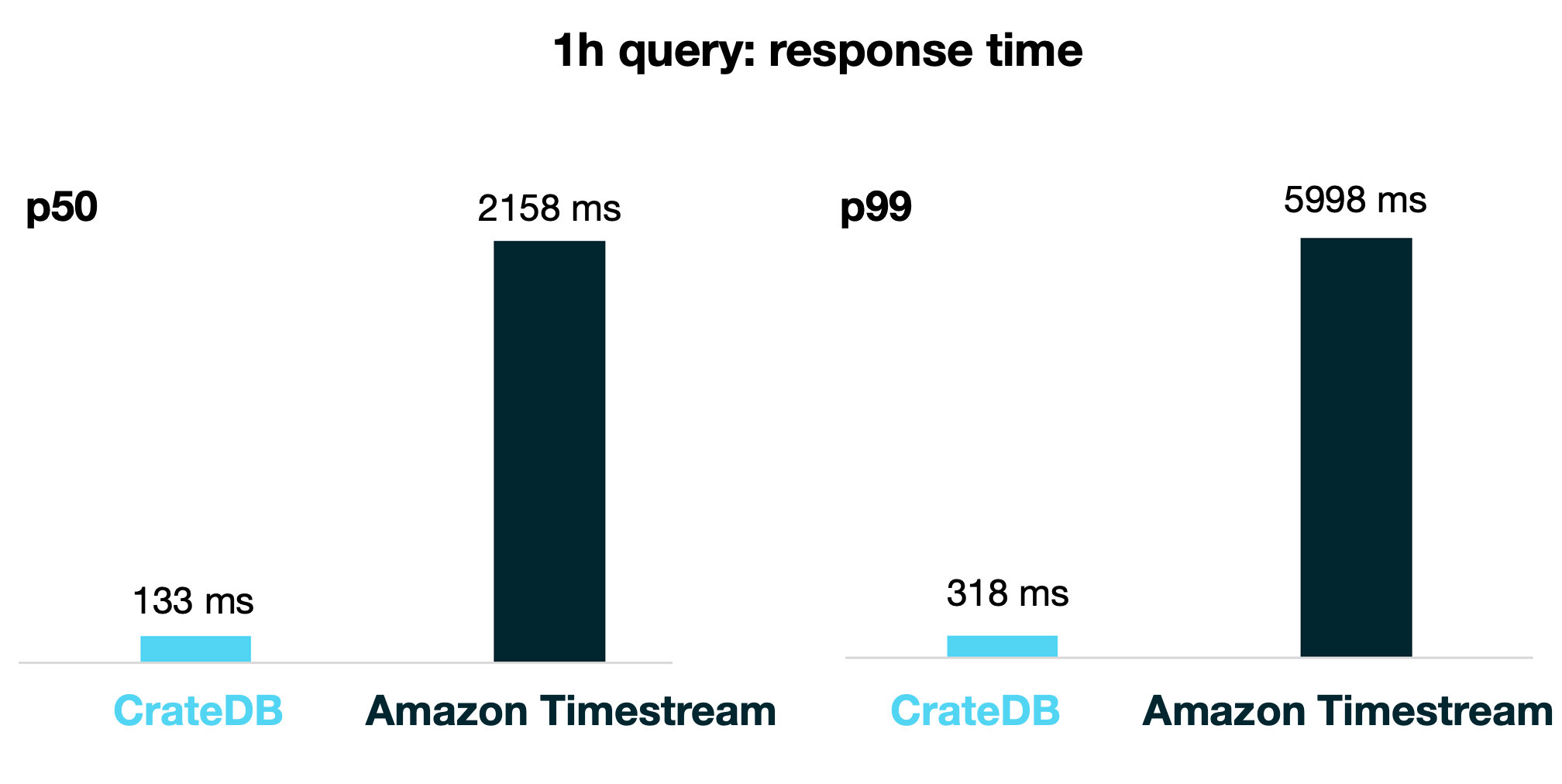 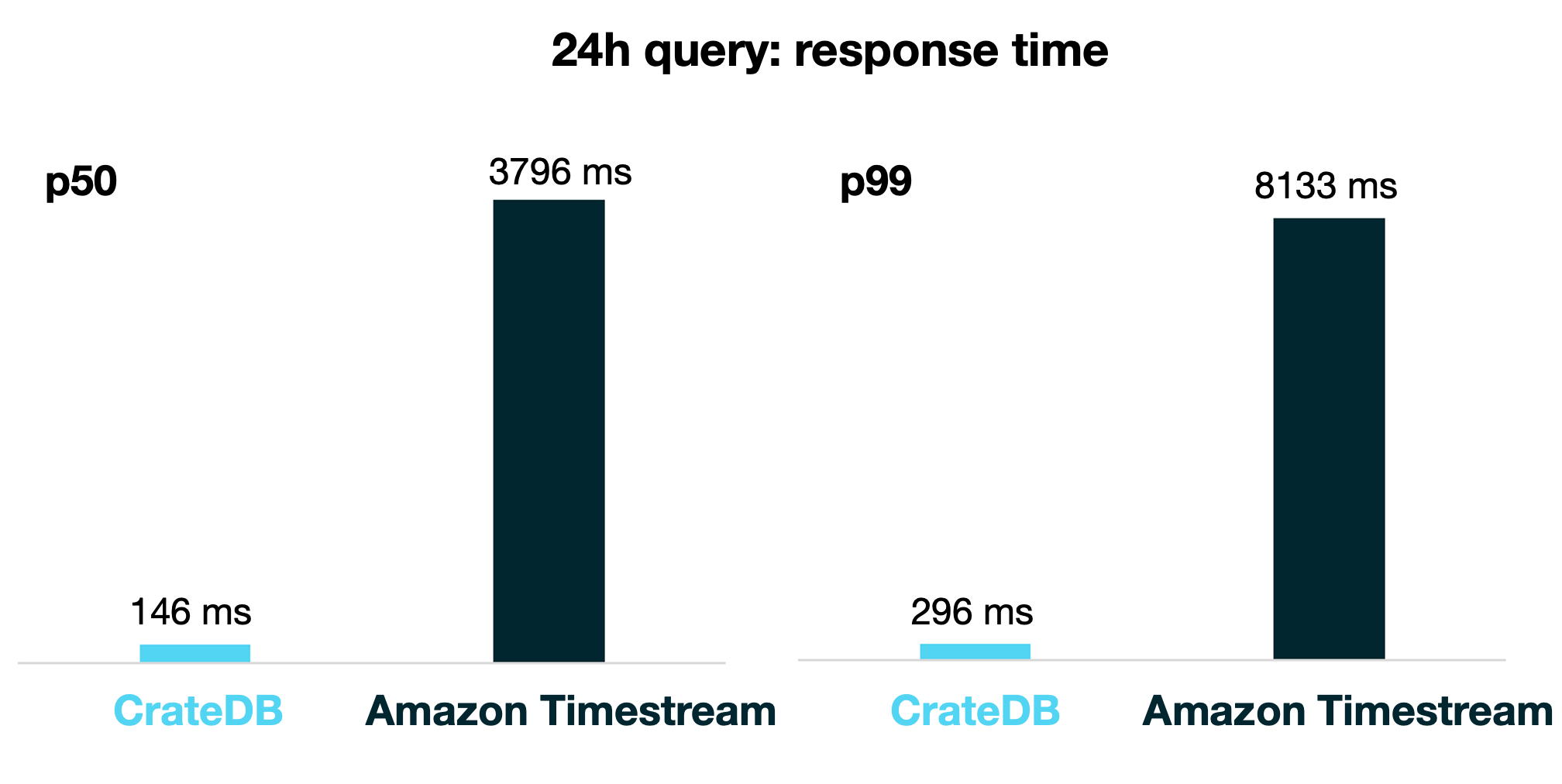 To wrap our analysis up, let's take a look at the cost.

As we said before, AWS Timestream pricing is based on usage. However, AWS does not break it down, and it is difficult to know how the total cost is going to be calculated. To take a guess, we limited the cost calculation to single days, using only one part of the service and therefore getting an insight into how each aspect contributes to the final costs.

We deduced that for our use case:

With respect to the storage costs: AWS Timestream does not tell you how much storage you're using, so to discuss storage costs is also difficult. But assuming that one year's worth of data is stored, and even assuming that AWS has similar storage requirements as CrateDB, we'd get 10.4 TB of data. This would add another +312 USD per month to the bill.

With the insights we have, the total cost of this use case in AWS Timestream is 2500 USD/month. This is way cheaper than other databases in the market, including CrateDB, which costs around 5,300 USD/month for this use case.

As they promise, AWS Timestream is cheaper than other databases. This is clearly a strong point. However, AWS Timestream doesn't seem a database mature enough for large-scale IoT use cases like the one we tested.

Timestream's insert and query speeds are between 10x and 20x slower than in CrateDB. Additionally, it doesn’t' offer built-in backup compatibilities, which results in extra engineering work and, possibly, extra costs that are not reflected in the apparently low bill.

Of course, the product is still very young. It will be interesting to see how the development evolves!

Find out more about how CrateDB is built